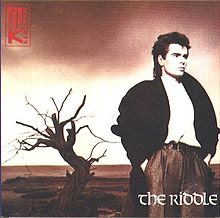 Following his March 1984 debut album Human Racing (click here for my review), Nik Kershaw followed it up on November 10th of that same year with his second album The Riddle.


Side one opens with “Don Quixote”. This song was the last single released; it went to number 9 in Ireland and number 10 in the UK. Right from the start, I like the funky guitar and the swinging synth line. And, of course, any lyrics that reference Superman and Lois Lane appeals to this long time comic-book geek.

I enjoy how the opening of “Know How” bounces from one speaker to the other. The whole song has an interesting rhythm to it. The lyrics speak of those in positions of authority whose power has corrupted them and made them self-centered and uncompassionate.

“You Might” is a more up-tempo tune with a danceable beat. The lyrics talk about the roles people play to be popular and liked, even though they are all façades.

“Wild Horses” is all about people who might be unhappy with their current life but are too stubborn to make a change even when it is presented to them. I like the gentle sway to this one.

“Easy” brings back that jazzy funk guitar sound from earlier. This one has a very laid back groove to it that is easy on the ears and a chorus that quickly settles into your head.

The title track “The Riddle” starts off side two. As the first single, it reached number 3 in both the UK and Ireland, number 5 in both Sweden and Norway, number 6 in Australia, and number 8 in Germany. The song has a bit of an Egyptian feel to its opening melody. The lyrics are quite cryptic in nature and require multiple listens to decipher their meaning. I’m still working on that.

“City of Angels” is very much a commentary of the lifestyle of a celebrity in Los Angeles, California. The music has a cool vibe to it, like a Donald Fagen song.

“Roses”, with its quirky percussion, appears to be a response song to those who spend time assuring you that everything is alright even when it might not be. It cautions about believing everything you hear for eventually it might be too late to turn back.

“Wide Boy”, the second single, went to number 9 in the UK, number 5 in Ireland, and number 7 in Australia. The lyrics tell of a guy who has earned overnight success thanks to one hit record and another who did so thanks to one movie. I see it as a message to the masses about how quick we are to idolize someone because it is the current, hot thing to do.

“The album closes with the longest of the ten tracks, the six minute long “Save the Whale”. It is very much a song about conservation and preservation of a species. The tempo sets up a haunting, solemn tone needed for a message such as this.

The US release of the album had a slightly different album cover as far as placement of the wording. It also shuffled the order of the tracks a bit and replaced “City of Angels” with the previously released hit “Wouldn’t It Be Good” from the debut album. That last bit was likely a marketing ploy to capitalize on the popularity of the earlier song in the US (thanks to a heavily-rotated MTV video for the song).

When The Riddle was released in 1984, I was well into my sophomore year of college. I was a fan of Kershaw’s thanks to “Wouldn’t It Be Good” (one of my favorite songs ever). This album, however, did not make a major hit on my radar at the time. I am glad that the record labels are making some of these lost 80’s albums available again as digital downloads. It allows music lovers like me a chance to discover new and interesting things from favorite artists.
Posted by Martin Maenza at 4:30 AM

Well that was a blast from the past :) I'm pretty sure I have a Nick Kershaw single in my collection somewhere, though I was more of a Numanoid - still am I guess. What a great era that was for music!