Book Review: All Of The Marvels by Douglas Wolk 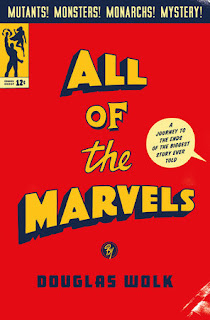 I had the opportunity to read an early galley of the upcoming book All Of The Marvels by Douglas Wolk. He took on the herculean task of reading more than 27,000 Marvel comics in order to present a "traveller's guide" to those looking to dove into the rich tapestry that is the Marvel narrative.
Being a life-long comic reader myself, one who discovered Marvel in the early 70's, I have my own winding history with their output. However, mine was even spotty - preferring Spider-Man and team titles like the Avengers, the Fantastic Four and the X-Men to others like Thor, Daredevil or Iron Man. Having a Marvel Unlimited subscription has helped me in recent years to correct that, allowing me to devour runs of titles I never picked up back in the day.
Wolk does a good job in this book giving an overview of certain issues to vist, also hitting some spotlights on specific favorite characters (as much as 320 pages will allow). There is a stronger focus on runs post-2000 as well as the early years from the 1960's. The 70's and 80's get some mention too, while the 90's - a very rough period for comics in general - gets a deserved glossing over.
One particular thing I really liked is the Appendix which gives a nice overview of the Marvel universe history in just a few pages. I would recommend highly for folks who might only know Marvel from the movies or TV shows to read that first.
This book is scheduled for an October release. I had already tagged it for my to-order list for the library. I think it contains some solid advice on tackling a deep dive into the Marvel continuity that will benefit my patrons.
https://www.penguinrandomhouse.com/books/549063/all-of-the-marvels-by-douglas-wolk/
Posted by Martin Maenza at 11:50 AM No comments: