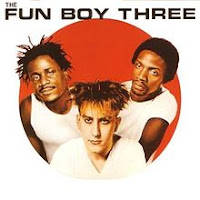 From 1981 to 1983, three former members of the Specials formed their own group. Hall (vocals), Neville Staple (percussion and vocals) and Lynval Golding (guitar and vocals) became Fun Boy Three, a band that worked in Ska and heavy percussion into their music. They also helped launch the musical career of Bananarama who provided some backing vocals.


The first of the two albums by the group is the self-titled debut Fun Boy Three from March of 1982, another album that is celebrating its 30th anniversary this month. It went to number 17 in New Zealand, number 10 in the Netherlands and number 7 in the UK. It also generated a pair of singles.

Side one starts with “Sanctuary”, a track just under a minute and a half and consisting of a chant in Latin backed by a steady, ominous beat.

That leads into the shuffling beat of “Way On Down”. The trumpet gives it a bit of a jazz element to the tribal rhythms.

“The Lunatics (Have Taken Over the Asylum)” was the first single. It went to number 20 in the UK, number 28 in Ireland and number 46 in New Zealand. I’ve been familiar with this track since the early 80’s when the local college radio station played it; in 1990 I got a copy on one of the CDs in Rhino’s fifteen disk new wave collection. The lyrics make a commentary on the political landscape of the early 80’s, likening those in power to the insane that need mental treatment.

“Life In General (Lewe In Algemeen)” is next up. The phrase “lewe in algemeen” is Afrikaans as are the beats of this track; the lyrical content references the various conditions of that southern continent. If it isn’t obvious by this point, the guys from Fun Boy Three have an appreciation for world music and like to give the listener a bit of variety.

“Faith, Hope and Charity” has a funky guitar groove with some synthesizer thrown in to boot. There are a lot of musical layers here so that you can pick out new elements with each subsequent listen.

“Funrama 2” is a fun little jam session in the studio with various sound elements thrown into the mix just to see how they’ll play off of each other.

Side two opens with the strong piano line and finger snaps of “Best of Luck Mate”. The vocals mix spoken word with backing vocal harmonies.

Bananarama gives an assist on “It Ain’t What You Do (It‘s the Way That You Do It)”, a cover of a calypso song first recorded in 1939. This second Fun Boy Three single reached number 4 in the UK, number 5 in Ireland and number 3 in the Netherlands; in the US it charted at number 49 on the Dance Club list. My first exposure to the song was within the last couple years of listening to 1st Wave on Sirius/XM; I usually hear it at least once a week there. Its simplistic, repetitive shuffle rhythm really gets into my head and I soon find myself singing right along.

“The Telephone Always Rings” mixes touches of ragtime with a Ska sound. The ringing phone effect fits perfectly with the piano tempo.

I too like the piano opening on “I Don’t Believe It”; it sets a dark mood for the piece. I picture someone holed up in their basement.

“Alone” closes the album with the haunting background vocals of Bananarama to a samba beat. The song really captures the feelings of isolation very well.

Back in my high school days of 1982, I would not have appreciated the complexity put in by the band on Fun Boy Three. The songs are a bit darker and deep, better suited for contemplation rather than celebration. As I’ve aged in the thirty years since its release, I can certainly appreciate the musical elements and talents that the guys brought to this record.
Posted by Martin Maenza at 4:30 AM