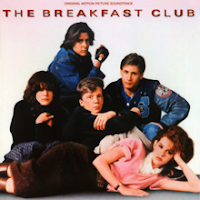 In 1985, John Hughes presented the second in his teen drama films. The Breakfast Club follows five high school teenagers, all from different social cliques, as they are forced to spend an entire Saturday together in detention. The film starred Emilio Estevez, Anthony Michael Hall, Judd Nelson, Molly Ringwald and Ally Sheedy as the students, with Paul Gleason as the school principal and their jailer for the day.


The soundtrack album was produced by composer Keith Forsey, an English songwriter, drummer and record producer. He worked with such artists as Generation X, Billy Idol, Charlie Sexton and the Psychedelic Furs. He co-wrote most of the tracks that appeared on this album.

Side one opens with the film’s signature song. Simple Minds’ “Don’t You (Forget About Me)” was a smash hit world-wide and reached the Top 10 in most countries. It went to number 7 in the UK (though it stayed on the UK charts for a span of two years), number 6 in Australia, number 4 in Germany, number 2 in Italy and Belgium, and number 1 in Canada, the Netherlands, and the US. It was ironic because at first the band rejected Keith Forsey’s tune. Only after seeing a screening of the film did they change their mind about recording it. That was a good thing for both them and the film. For me, this song is a quintessential 80’s song with a perfect mix of teen angst and indifference. I remember it being all over the radio and MTV back in the day, along with a big party favorite on the college campus and in the clubs.

Before she did voice acting for such cartoons as Rugrats (she was Tommy Pickles) and The Powerpuff Girls (where she voiced Buttercup), Elizabeth Daily was a singer. She performs the cut “Waiting”, a slinky dance track whose rhythm mirrors the feelings of restless anticipation. I like how it has a slow build as the song progresses.

Wang Chung was riding a growing popularity wave in 1985, so adding them to the soundtrack made sense. “Fire in the Twilight” has a danceable beat but it lacks a major hook to make it truly memorable.

The first of Forsey’s instrumental tracks that fill out the record is “I’m the Dude”. This one has a decent, up-tempo rhythm that rocks along at a great clip.

Jesse Johnson and Stephanie Spruill team up on the duet “Heart Too Hot to Hold”. Johnson is known for his Minneapolis dance sound which he delivers on this mid-tempo tune.

Side two opens with an instrumental by Gary Chang called “Dream Montage”. The track never appeared in the film as it was part of a scene that was removed from the final cut of the film (to shorten the running time). It has a nice musical swagger to it with a funky wah-wah guitar riff.

Karla DeVito, an actress and singer who worked as a backup singer for Meat Loaf before doing her own solo album in 1981, serves up “We Are Not Alone”. Written by actor Robbie Benson, this one has a solid rapid-fire rhythm and DeVito’s powerful vocal delivery.

Forsey is back then with the instrumental “the Reggae”, a laid back and cool tune that sets an interesting mood. I am not sure how it exactly fits in with the film though.

Joyce Kennedy poses the musical question “Didn’t I Tell You” with this mid-tempo rocker. This African-American singer was a member of Mother’s Finest, a funk group who had some R&B releases in the 70’s.

The album closes with Forsey’s “Love Theme” which appeared in the film when Bender (Nelson) and Claire (Ringwald) find themselves romantically drawn to one another.

While I have always been a fan of the film, I had not gotten a hold of the Breakfast Club soundtrack until recent years. I think the reason was that only the Simple Minds song was a hit (and I had a copy of that on a greatest hits collection). The rest of the album though is pretty good. I was concerned that four instrumental tracks would be a turn off, but they are decent musical compositions that encourage repeat listens.
Posted by Martin Maenza at 4:30 AM