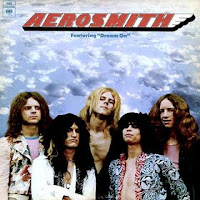 
Side one opens with “Make It”, which was also the debut single from the group. The song opens with a solid guitar riff by Joe Perry and Brad Whitford. Joey Kramer’s drums are a rapid-fire attack.

“Somebody” too opens with a solid guitar riff. Tom Hamilton on bass provides a solid foundation as well. The song has a down-and-dirty rock-blues sound that the Boston band showcased on their early albums.

The third single from the album was “Dream On”, a signature rock classic. The song went to number 87 on the Canadian charts and number 59 on the US Billboard Hot 100. Where it really gained public acceptance though was on the album-rock radio stations of the 70’s. The song was re-released as a single in 1976 and went all the way to number 6 on the US Billboard Top 40. It is ranked at number 172 on Rolling Stone magazine’s list of the 500 Greatest Songs of All Time. Tyler plays the piano on this one, giving it a totally different sound and making it stand out. Then there is that note at the three-minute-thirty mark that very few can touch. I can’t tell you how many times I’ve heard this one since I was a kid in the 70’s, but it is one of those songs that never gets old. There is so much theater and drama to it as well as pure rock power.

The first side closes with “One Way Street”, the longest track on the record at seven minutes in length. This is a solid blues-jam song that allowed the band to really work it.

Side two begins with “Mama Kin”, the second single from the album. This is the first of two tracks that feature David Woodford on saxophone. I really like the guitar riff on this one, very catchy and sticks with you. This was a fun one to play on Guitar Hero: Aerosmith.

Woodford‘s sax also shows up on “Write Me a Letter”.

“Movin’ Out” is one of the heavier tracks on the album, both from the music and the vocals.

“Walkin’ the Dog” was originally recorded in 1963 by American blues singer Rufus Thomas. Despite the nursery rhyme lyrics, the cover here takes the track to a different level thanks to Aerosmith’s hard rocking approach.

I was first exposed to Aerosmith’s debut thanks to my older brother and the album-rock station we listened to out of Buffalo, NY. Back then, the blue-rock style was not something I got into (hey, I was eight years old at the time - what did I know?) but as I’ve gotten older I can appreciate it a lot more. Aerosmith was just the tip of the iceberg of a rock career that would span the decades and encompass generations of fans.
Posted by Martin Maenza at 4:30 AM