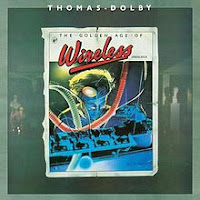 Hailing from England, keyboardist/composer Thomas Dolby released his first full-length studio album The Golden Age of Wireless in March of 1982. The album reached number 65 on the UK charts, number 45 on the US R&B charts and number 13 on the US Billboard Hot 200.

Depending upon when you discovered this one, the record might be slightly different. There were actually five total releases that changed up between covers (a cartoon version and one of Dolby on a stage) as well as track listings (to include the songs that were becoming popular due to radio and MTV airplay). However, since what I want to celebrate is the original’s 30th anniversary, we will go with the first UK and US releases for this review.


Side one of the UK release opens with the thumping drum-machines of “Flying North”. The keyboards dance, giving the whole song a lighter sound. The lyrics paint a romantic portrait of air travel long since lost in today‘s hurried world of security and such.

“Commercial Breakup” has a bit of a 70’s sound with its funky groove. This dance tune takes a look at broadcast radio.

Almost contrary to its title, “Weightless” opens on a rather heavy musical note. Then the veil lifts and it moves into a more jazzy rhythm.

I‘ve always liked the quick tempo of “Europa and the Pirate Twins”, the tale of two childhood friends who were separated by war. Their paths cross again nine years later, but she is now a famous star and impossible to get close to.

“Windpower” has a strut to it thanks to the various percussion beats and synthesizer snaps. This one has so many great layers to it; I just close my eyes and let it all carry me off. It is a great stress reliever song for me. John Marsh delivers the shipping broadcast at the end.

Side two starts with “The Wreck of the Fairchild”, a piece that is based slightly on a 1972 Uruguayan plane crash in the Andes. Guido Orlando provides the Chilean audio over Dolby’s energetic composition.

That track leads perfectly into the more somber “Airwaves”, a statement of the changing importance of radio in the daily lives of the population. At one time it was a unifying power that brought the whole family together to learn the news of the day and entertain.

And then that leads directly into “Radio Silence” and the story about Carolyn. Lene Lovich provides vocals on this track, a return favor for Dolby writing her hit single “New Toy” and playing keyboards on her tour a few years prior.

“Cloudburst at Shingle Street” is about an apocalyptic storm hitting the coastal hamlet of Suffolk, England.

The first US release shuffled up the order a bit and bumped “Commercial Breakup” to side two, which was then replaced with “Leipzig”, the B-side of a 1981 single. The song is about the bustling city and gets its name from a town in Saxony, Germany.

A fifth track “Urges”, the A-side of that 1981 single, was added to side two of the first US release as well to give the record an even number of songs on each side. The piano on this one creates an anxious, frenzied feel as a man approaches a woman he desires in a smoke filled nightclub.

The next two releases in 1983 dropped off “The Wreck of the Fairchild” in favor of “She Blinded Me with Science”, the popular single that went to number 49 in the UK, number 7 in New Zealand, number 5 on the US Top-40 and number 1 in Canada.

In 1982, before Dolby was hitting the pop charts here in the US, I heard a number of the tracks from The Golden Age of Wireless on the local college radio station. Now, when it came time to actually add some of his vinyl to my collection, I went with the 1983 EP Blinded By Science (click here for that review) with some extended versions of a few of the songs here. In the years after, though, I really got into more of the tracks here as well.
Posted by Martin Maenza at 4:30 AM

Very nice summation. This album was groundbreaking and so full of talent, laying the groundwork to an amazing 30 year career. I play all of these tracks still on a regular basis. Thanks for bringing it back so cogently!

Thanks for the comment, Joe, and thank you for reading.