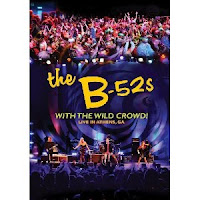 Last October I reviewed here on the blog the CD release of The B-52's - With the Wild Crowd live in concert (click here for that review).

This month, Eagle Rock Entertainment has issued the accompanying DVD of that concert, recorded from Athens, Georgia, on February 18th, 2011.


As I mentioned with the CD review, With the Wild Crowd! (Live in Athens, GA) was a non-stop dance party. The DVD release includes all seventeen of the songs that appeared on the CD release along with three additional performances: "Dancing Now", "Deadbeat Club" and "Strobe Light".

The crowd at this performance is totally into it, with many people dressing up in while wigs, funky hats, feathered boas and more. I love the crowd reactions of people dancing and singing along with the career spanning songs.

What is equally wonderful to see is the band as vibrant as they were thirty four years ago when they started the group. Yes, they are all three and a half decades older, but Keith, Kate, Cindy and Fred show no signs of slowing down. They are all in top form as they give the crowd an evening full of fun and music.

The added bonus is an interview with the quartet. This is an intimate, candid conversation as they talk about their coming together as a group and how their career evolved as they became a popular in the later part of the 80's. This is a thirty-five minute piece, well-worth the price of the DVD alone. It is so cool to see them together, showing how they are still very close friends after all this time. That is rare with bands. Their stories are punctuated with candid photos from the 70's and early 80's. I love too how they spend a good bit of time talking about Ricky Wilson, a key factor in the formation of the group.