Stacy Lattisaw - Take Me All The Way 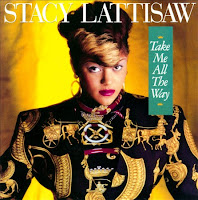 In 1986, Stacy Lattisaw moved from the Cotillion record label, where she got her start, over to Motown. In August of that year, she released her seventh solo studio album Take Me All The Way. The record went to number 131 on the US Billboard Hot 200 and number 36 on the Billboard R&B Album charts. It generated two top 10 hits on the R&B and Dance charts in the US.


Side one starts off with “Jump Into My Life”, the second single from the album. It went to number 79 on the UK charts, number 13 on the US Billboard R&B chart and number 3 on the Billboard Dance chart. The song is charged with desire and attraction, fueled with a solid dance beat, funky guitars and kicking keyboards. I love how this one echoes on my stereo speakers.

“The Hard Way”, a lesson in persistence and dedication, continues to deliver on the dance front.

Things slow down a bit with “Take Me All The Way”. Stacy hits some amazing notes on this beautiful ballad about a night of love and passion. I remember this one was a go-to slow dance number in the clubs back in the day.

“A Little Bit of Heaven” is infused with a bouncy calypso rhythm on the keyboards. Pleasantly surprising, it adds a fun flavor to this first side.

“Long Shot” was the B-side to the second single and used again as a B-side in 1987 for another track. This ballad is all about taking a chance on love. I really like the optimism presented here; I really think this one could have been a hit single on its own if given the chance.

Side two explodes with “Nail It to the Wall”, the first single from the album. It went to number 76 on the UK charts, number 48 on the US Billboard Hot 100, number 4 on the Billboard R&B chart and number 2 on the Billboard Dance chart. This is one of my favorite dance tracks from the mid-80’s; whenever this one came on in the clubs, I just had to grab someone and dance to it. I love its powerful percussion, haughty horns, and Stacy’s sexy and ferocious vocals. It is one of those tracks I can throw on repeat and just cut loose for an amazing cardio workout.

After the last smoking hot track, it is time to slow things down again. I really appreciate the emotional delivery Stacy puts into “Love Me Like the First Time”; it gets to my core whenever I hear it. The song is bittersweet, about a final night between two lovers.

Things stick to a slower tempo with “You Ain’t Leavin’”, a sort of counterbalance to the previous track. Here, Stacy doesn’t want her man to go. I like the saxophone solo on this one which drives the point of the lyrics home.

Time for one more dance groove with “Over the Top”. While not as full-force as the earlier club favorites, this one has a steady build to an infectious chorus.

The side and album closes out with the ballad “One More Night”. This is another bittersweet love song about the hope to rekindle a lost love. This one is more of a natural pairing with the earlier “Love Me Like the First Time”; however this one has a bit more hope for reconciliation.

The year following the release of Take Me All the Way was a period when I was spending a lot of my weekend nights at the local dance clubs. I was in my final years of college in 1986 and 1987, splitting my time between my co-op job in Kingston, NY, and back at school in Rochester, NY. In the various clubs I frequented in both locals (Let‘s Dance in Poughkeepsie, Joe‘s in New Paltz, and a number of Rochester suburb night spots whose names escape me at the moment), Stacy Lattisaw’s tunes were featured prominently in the deejay rotations. They were guaranteed floor-packing tunes.

I owned a copy of this album on cassette and played it in my car, on my boom box, wherever and whenever I was in the mood to dance my cares away. That cassette is long gone, but I was able to purchase digital downloads of the tracks for my music collection recently. Listening to this album again instantly takes me back over twenty five years. This one will always remain a favorite of mine.
Posted by Martin Maenza at 4:30 AM

Email ThisBlogThis!Share to TwitterShare to FacebookShare to Pinterest
Labels: 80's, Jump Into My Life, music, Nail It to the Wall, Stacy Lattisaw, Take Me All The Way

Take Me All The Way was also reissued on CD by Funky Town Grooves in 2011 but it was limited edition and quickly sold out. It contained two bonus tracks in the form of extended versions for "Jump Into My Life" and "Nail It To The Wall". It would have been nice to also have the single edits but at least the album itself was remastered and the original track listing made widely available for purchase in digital format.

eMusic.com and iTunes both seem to have the original Motown release with just the ten tracks. The two songs you noted are 4:17 and 4:42 there respectively. I would love to get those extended versions digitally some day as they were two of my dance jams back in the day.

Agreed! I was happy to get the digital release as it is far superior to the vinyl-sourced rips I had been playing all these years, but I wish they'd included the bonus tracks on the digital release as well, or even issued digital singles with additional edits, remixes, etc. It makes sense to make something off the material whilst pleasing the fans, rather than just let the masters perish in the vaults. "Nail It To The Wall" edit of 12" vocal clocks in at 3:54, whereas the 7" Version of "Jump Into My Life" may actually be the album version.

Sounds like we both love this album a lot. Thank you so much for reading my blog and taking the time to comment. I always appreciate hearing from others.