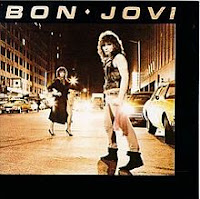 In 1980, Jon was working at a recording studio co-owned by his cousin Tony Bongiovi. There he made several demos but failed to get any bites from record labels. In 1982, while working at a New York City FM radio station, one of deejays heard Jon’s demos and added the song “Runaway” to a compilation album of local talent. After getting some local airplay, Mercury Records signed Jon.


On January 21st, 1984, the New Jersey rock band released their self-titled debut album. Bon Jovi went to number 43 on the US Billboard Hot 200, number 38 in Japan, number 39 in Australia and number 71 in the UK. It has since sold over 3.5 million copies.

Side one opens with “Runaway”, the debut single. The song went to number 39 on the US Billboard Top 40. It opens with an urgent keyboard riff, punctuated by guitar and drums. The story of this up-tempo rocker is about a young woman who takes off to the city to escape life at home and find a good time.

“Roulette” opens with a promising, heavy guitar grind. The lyrics map the imagery of a popular game of chance to a love triangle relationship.

“She Don’t Know Me”, as the second single, reached number 48 on the US Billboard Hot 100. It stands out a bit from the rest of the record for a couple reasons. First, the song is the only one in Bon Jovi’s library that was not written by any of the band members; this one was written by Mark Avsec who played with Donnie Iris, Wild Cherry and the James Gang. Second, the music tones down the rock aspects a bit and turns up the pop-dance elements a bit more. Still, it isn’t a bad song.

“Shot Through the Heart” has a very dramatic opening that sets the tone. The lyrics tell of hurt and betrayal. The title of the song would be used by the group as the opening line for a later hit “You Give Love a Bad Name” from their Slippery When Wet album (click here for my review of that one).

“Love Lies” was co-written with keyboardist David Bryan Rashbaum, thus the prominent presence of the piano in the opening.

Side two begins with “Breakout”, a song with a strong synth line to accompany Tico Torres’ thundering drum beats. Another song about relationships, this one is about escaping a coupling built upon deception. It has another searing guitar solo by Richie Sambora.

Released as the third single in Japan only, “Burning for Love” continues the theme of love with the wrong kind of woman.

“Come Back” opens with a racing-guitar riff that the band liked to go to a quite a bit. Jon pleads to his girlfriend to return to him even though she is involved with another man.

The album closes with the rousing “Get Ready”, a high energy promise of a date to remember.

Bon Jovi hit the stores during my freshman year of college. During that time I was very much in my new-wave and dance phase so this debut did not register beyond the charting singles. I would get into Bon Jovi a bit more in the summer and fall of 1985 when I was living and working a co-op job in New Jersey. The local radio stations there liked to play the home state group quite a bit.

I find this debut album showed the raw potential of Bon Jovi with a quite a few hints at what was to come. Lyrically, the songs tend to stick to one particular theme - relationships. Given that the songs were written by the guys while they were in their early 20’s, it makes sense that they would focus on singing about things they knew. Still, for me, I would have liked it if they had mixed things up just a little bit to break up the pattern some.
Posted by Martin Maenza at 4:30 AM