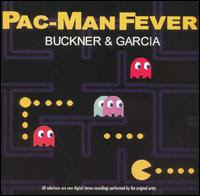 March of 2012 marks the 30th anniversary of the release of Jerry Buckner and Gary Garcia's novelty album Pac-Man Fever. The duo scored with a Top-10 hit with the title song in January of 1982 and followed it up a few months later with a ten song album paying tribute to video games that were lighting up the arcades at the time.

For my review of this album, please click here.
Posted by Martin Maenza at 4:30 AM