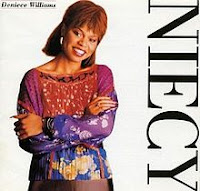 
Side one opens with “Waiting By the Hotline”. This mid-tempo tune was the second single from the album; it only reached number 103 on the US Billboard Hot 200 but got as high as number 29 on the US R&B charts. It is simple enough, a straight-forward song about a woman patiently sitting by her phone until a certain guy comes around.

Next up is a cover of the Royalettes’ 1965 R&B hit “It’s Gonna Take a Miracle”. As the first single from the album, Williams’ version went to number 10 on the US Billboard Top 40, number 6 on the US Billboard Adult Contemporary chart, and number 1 on the US Billboard R&B chart. This mid-tempo ballad was all over the radio back in the day; it is a sweet love song that really showcased Williams’ vocals well. It has a swaying rhythm that was perfect for those slow dances.

“Love Notes” was the B-side to the second single; it is a bit more lively than the track that opened the album. If I had this one as a 45 single, I most likely would have played this side more often. Because of its disco elements, you could actually dance to it (though the tempo does fluctuate a bit with a slower chorus).

Things slow right back down with “I Believe In Miracles”, a song full of faith and optimism.

Side two begins with the question “How Does It Feel”. This one starts out with a slow piano opening and then picks up the paces with a funky little groove. Williams questions a friend who has been left by her man for someone else. She is able to get some good runs in on this one.

The third single “Waiting” only got to number 72 on the US R&B chart. This slower ballad retreads similar ground to the first track on the album - an anticipating anthem. Of the two, this one is a bit better for me as it tends to avoid a lot of the clichés. Still, I question why she and producer Thom Bell decided to get repetitive in the material.

“Now Is the Time For Love” is next. This one has a slight samba rhythm to it with a light mix of horns thrown in. I like how it changes up the pace a bit from so many slower ballads. However, I don’t think they went far enough. It still stays pretty safe.

“A Part of Love” was the B-side to the first single. Williams’ strong voice does well on this one as the piano and strings keep gently in the background.

Beyond the hit single, Niecy was hardly on my radar back in 1982. It is a pleasant enough record but fairly middle of the road. Deniece Williams has a strong voice that shines in parts, but overall I found that the material was a bit lacking overall.
Posted by Martin Maenza at 4:30 AM