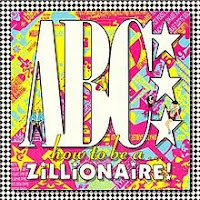 After their smash selling debut The Lexicon of Love in 1982 and the follow up Beauty Stab in 1983 (click here and here respectively for my reviews of those two), ABC released their third album How to Be a…Zillionaire! in October of 1985. The album went to number 36 in Canada, number 28 in the UK and number 30 on the US Billboard Album chart.


Side one opens with ping-pong percussion of "Fear of the World", which sounds very cool with headphones on. That and the variety of synthesizer sounds courtesy of Mark White really make this song for me. It is very rich and full.

The first single from the album was "Be Near Me"; it went to number 26 in the UK, number 9 on the US Billboard Hot 100 and number 1 on the US Dance charts. This is one of my favorite tracks on this release, one that I sing along to. Don Snow provides the pleasing piano here which is the perfect backdrop for Fry‘s classy crooning.

"Vanity Kills", the third single, did not fare as well; it only got to number 74 in the UK and number 91 in the US. However, it did score well on the US Dance charts (going all the way to number 5); no surprise there as it has quite an infectious rhythm. The lyrics paint the picture of a self-absorbed she whose best friend is her mirror. Guy Barker has a trumpet solo on this one.

The final single "Ocean Blue" went to number 51 in the UK. ABC draws upon a classic soul vibe for this ballad.

There is something so raw and primitive about "15 Storey Halo"’; Brad Lang’s bass and Barker’s horn really punctuate things on this swinging groove. I love how the words play upon themselves with alliteration and wit. Of the non-hit tracks, this one is my favorite - a four-star in on my iPod.

Side two begins with "A to Z", a funky industrial dance jam that allows Fry, White, Eden (the stage name of British journalist Fiona Russell-Powell) and diminutive David Yarritu to each introduce themselves. It turns out though that the part by “Eden” was actually a recording of Fry with his voice sped up.

"(How to Be a) Millionaire", the second single, reached number 49 in the UK and number 20 in the US. This song, which was inspired by Martin Amis’s 80’s book Money, is my favorite of the hits from this album. It has a great beat and strong musical hooks piled up high like winnings on a casino table.

"Tower of London" continues the dance party. I really like the scatting backing vocals on this one.

Time for one more groove. "So Hip It Hurts" has a retro feel too, talking about gender-crossing fashions and exotic looks.

Things slow down for the final track "Between You and Me", a song about opposing parties caught amidst conflict and confrontations. I really like how Fry turns the phrases on this one.

I was just beginning my junior year of college when How to Be a…Zillionaire! was released. I was already a big ABC fan from a few years earlier, and this cassette quickly hit the heavy rotation on my music listening at the time (in my car and on my tape deck). I’ve probably listened to this one from beginning to end three dozen times in the past twenty seven years and I never get tired of it. For me, it is a solid record from start to finish - not a bad track in the mix.
Posted by Martin Maenza at 4:30 AM

Email ThisBlogThis!Share to TwitterShare to FacebookShare to Pinterest
Labels: 80's, ABC, How to Be a...Zillionaire, Mark White, Martin Fry, music