Sparks - Angst In My Pants 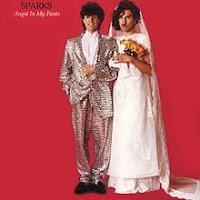 Sparks is an American rock band formed in Los Angeles, California, in the late 1960’s. At the core were brothers Russell (vocals) and Ron (keyboards and synthesizers) Mael. Their sound floated from rock to electronic and back again as their first dozen years of recording passed.

On March 29th, 1982 (exactly thirty years ago today), they released their eleventh studio album Angst in My Pants. The record peaked at number 173 on the US Billboard Hot 200. On the album the brothers worked with Bob Haag (guitar), Leslie Bohem (bass) and David Kendrick (drums).


Side one opens with the title track “Angst in My Pants”, a tongue-in-cheek look at awkward guy who longs to be out among the social scene rather than spending his nights alone in his room. I like the simple musical structure on this one, so unassuming.

The single for the next track “I Predict” was the first song by Sparks to break into the US Billboard Hot 100 (it peaked at number 60). I was first exposed to this song on the nearby college radio station from SUNY Fredonia. The lyrics point out some rather odd and, occasionally, guaranteed prophecies. The final joke is the repeated lines “the song will fade out” only for the track to stop cold. The music video for the song was directed by David Lynch.

“Sherlock Holmes”, a quirky piece with a throbbing beat, is a tribute to the fictional detective of Baker Street in London.

Next up is “Nicotina”, an anxious number about the seductive evil of nicotine personified.

The brothers Mael next point their satirical aim directly at something from their hometown backyard. “Mickey Mouse” mocks the happy-go-lucky message of Disneyland as the happiest place on Earth. Many of Walt Disney’s creations get name-dropped in the lyrics.

Appropriately enough, “Tarzan and Jane” has a swinging tribal beat to it.

Next is “The Decline and Fall of Me”, which is in fact my least favorite track on this album. For me, this one lacks the type of quirky hooks (either musical or lyrical) that the others contain.

The final track appeared in the film Valley Girl (click here for the review of that soundtrack). “Eaten by the Monster of Love” is a bouncy number that mocks the all-encompassing aspects of love. I have always liked the underlying repetition of the song’s title throughout the song. If the studio has released a second single from the album, this one would have been a perfect candidate.

In 1982, Sparks was definitely an occasional blip on my musical radar. While the band was a little bit “out there” for normal radio, they were the perfect act for the alternative vibes of college stations. That’s where I would often here “I Predict” and “Eaten by the Monster of Love”. It wasn’t until late in 2008 though that I would pick up the whole Angst In My Pants album as I was building up my digital music library. Since then, this album has come up a lot in my 80’s rotation. It is music that looks at the world through a funhouse mirror and reminds me that we always don’t have to take things so seriously.
Posted by Martin Maenza at 4:30 AM