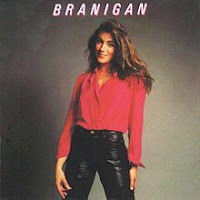 This month marks the 30th anniversary of the release of the debut album from American singer-songwriter Laura Branigan. In March of 1982, Branigan hit the charts and did well in the US (number 34 on the Billboard Hot 200), Canada (number 14) and Australia (number 50).


Side one kicks off with “All Night With Me” which was also the first single. While it only made it to number 69 on the US Billboard Hot 100, this ballad is a pleasant piece of pop. Branigan’s vocals convey the emotion of a woman ready to give herself completely to her love.

Next up was the second single and Branigan’s break-thru signature song, a cover of a 1979 hit from Italy. With its European-disco sound, “Gloria” danced its way into the Top-10 on numerous charts (number 8 in Germany, number 6 in the UK and New Zealand, number 4 in Ireland, number 2 on the US Billboard Top-40 and the US Dance charts, and number 1 in both Australia and Canada). Trevor Veitch reworked the lyrics in English to make it a song about a woman living life in the fast-lane and a friend encouraging her to slow down. The single earned Branigan a Grammy nomination for Best Pop Vocal Performance Female (she lost to Melissa Manchester). For me, the song had the perfect mix of synth-pop and dance.

“Lovin’ You Baby” has a big, dramatic sound to it and showcases Branigan’s powerful vocals.

The B-side to the second single was “Living a Lie”. I really like the urgency to the keyboards and guitars on this one; it definitely has a hard rocking edge. I definitely think this one could have been a hit had it been released on its own.

Side two begins with “If You Love Me”, another strong ballad. No surprise there as Diane Warren was one of the writers on this one.

“Please Stay, Go Away” is all about the conflicting emotions that come with some relationships. The chorus punctuates the point home with a little help from the overall driving rhythms.

“I Wish We Could Be Alone” is the only track on the debut that was written by Branigan herself. The lyrics tell of a couple in love, but both parties are married to other people.

Randy VanWarmer penned “Down Like a Rock”, a rollicking track about a woman drowning and the man who watches her sink. Yes, that sounds like a downer of a song subject but the rhythm on this one makes it a really fun song.

The album closes out with one more ballad “Maybe I Love You”. This one has a bit of a Linda Ronstadt feel to it with that soft-rock sound. If you’ve been keeping track, you see that the tracks alternate from slow to fast for the entire run. For me, that definitely works to keep the album from getting stagnant or repetitive.

Back in 1982, I owned a copy of “Gloria” on 45 and played both sides of that one. I was an instant fan of Laura Branigan’s music from that point on. What can I say? I have a weakness when it comes to female pop singers. I’ve had the whole Branigan album now for about four years and it is one of the more played 80’s albums in my iTunes library. Clearly my iPod’s album shuffle likes it as much as I do.
Posted by Martin Maenza at 4:30 AM

Laura Branigan was born 1952, not 1957.
Visit https://www.facebook.com/LauraBraniganForever for old rare pictures from early 50's, newspapers, from her time at Byram Hills high school where Laura attended 1966-70, and much more.

Interesting. I Googled and found many sources that said 1957 - including published obituaries. I wonder if the studio purposely misrepresented her age in order to make her appeal to a younger demographic.

Shall explain more. According to Laura's former friends and classmates she wasn't always polite with press and media. It was like you say, a way to look younger. And no one said no. Years are floating away, and 1957 is established. The problem is that they forgotten little brother Billy, who also was born 1957, Feb 28! They solved it by giving him a new birth year..1961!! (I have the birth notice).
It is mess and all depends of the wrong press release from August 28, 2004. Sadly it can't be edit and will follow like a shadow. The problem is when a joke turns to be true false and later written in hard solid stone. If you read her wiki, you shall know many hard words has been said and written. Myself was banned both from wiki and Laura's official homepage and Facebook, after I wanted them to tell Laura's fans the truth about 1952. It became even worser after this was published. http://pagesix.com/2015/08/24/laura-branigan-was-52-not-47-when-she-died/
Much more can be told, but then your blog will be a book :)

The very latest about Laura is her birth place. Brewster has been said, and also Armonk, but it is Mount Kisco, Westchester County. I had a message from Laura's brother Billy, saying they were both born in Mt Kisco, 1952 and 1957.
If you like, please take a tour on my new Pinterest site about Laura. It is just in its beginning, but new things are added almost every day. Photos, news from 60's-70's that shows Laura was born 1952.
Hopefully before summer I will have a copy of her birth certificate. And that will end all speculations. https://www.pinterest.com/born53/pins/