Dr. Hook - Players In the Dark 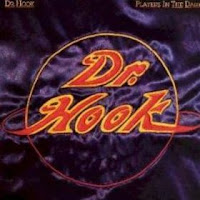 Thirty years ago this month, in March of 1982, Dr. Hook and his band the Medicine Show released their eleventh studio album Players In the Dark. The group was into their second decade of recording by this point with signs of the end coming soon (they would only put out one more non-compilation album after this one). This record went to number 118 on the US Billboard Hot 200 thanks to two strong selling singles.


Side one opens with “Baby Makes Her Blue Jeans Talk”, the band’s final Top-40 hit (it went to number 25 on the US Billboard charts). The single also reached number 17 in Canada. Sexy blue jeans were all the fashion in the early 80’s, and this song pays tribute to all those ladies who could entrance guys just by wearing their tight denims. I had this song on a 45 back in the day and played it a lot. To this day I like the rhythm of the guitars and how they play with the repetition of the song’s title in the chorus. It is all very mesmerizing.

“The Turn On” is a song about sex and all that things that turn the singer on (which is literally anything and everything). I think this is the first and only song that mentions wine coolers in the lyrics, which happened to be my drink of choice in the mid-80’s.

Next is “Lady Sundown”, a passionate ballad with some wonderful lyrical imagery. Even the guitar solo wrings out with emotion.

“I Can’t Say No To Her” is about that someone who you would do anything for, even when you know it is wrong.

“Loveline”, the final single from the album, went to number 60 on the US Billboard Hot 100 and number 19 on the US Adult Contemporary charts. This song is about unrequited love of a guy who has so hopelessly fallen for a woman who does not even realize it. He offers himself as that shoulder for her, and he is willing to wait for as long it takes for her to come around and notice him. I could definitely relate to this song back in 1982 as there was someone in my life who I felt exactly the same way about. I guess as teenagers we all went through that.

Side two begins with “Pity the Fool”, a tale of revelation. The singer realizes the woman he once loved was stringing him along, and now he shares his tale as a warning for the next fool who falls for her.

Next up is “Chained To Your Memory”, a beautiful ballad about a man who can’t escape the memories of his former lover. You can really hear the passion and emotion in Dennis Locorriere’s vocals on this one.

“Devil’s Daughter” is a smoldering tune about beguiling temptress who will use a man for her own needs and then discard him without a single thought.

“Hearts Like Yours and Mine” is a mellow, slow-tempo track. The lyrics compare various hearts in love, contrasting them with a couple who stays together even though both are miserable.

“Fire In the Night” closes the album with a mid-tempo rhythm about a tempting woman who will keep you warm on a cold and lonely night.

I think as the 80’s were opening, Dr. Hook was trying to find a way to transition from a more rocking band of the 70’s into the sounds of a new decade. For that, they went a bit more pop with the tunes on Players In the Dark. They certainly managed to pull a memorable hit out of that, but this album was likely overlooked by a lot of people. I found some pretty good tunes here, well written and certainly solidly performed by Locorriere and the rest of the band. The songs do fit into a theme of sorts - the emotion of love and so many various aspects of it. Some might find that a little repetitive and narrowly focused, but I think they did a decent job with it. I definitely would have liked to see another song in a more up-tempo style like the first track, clearly my favorite of them all.

While this one is probably next to impossible to find in a CD or in digital download format, you can do like me and take a visit to YouTube. I was able to pull up all these tracks there for my listening pleasure.
Posted by Martin Maenza at 4:30 AM