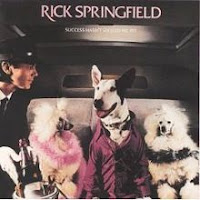 Australian singer, songwriter, musician and actor Rick Springfield got his musical start as the 1960’s were coming to an end. As a teen idol, American audiences first got to know him via the ABC Saturday morning cartoon series Mission: Magic!; the show featured him singing original songs each week. In 1981, he landed the role of Dr. Noah Drake on the hit soap opera General Hospital which in turn helped him revitalize his recording career.

Thirty years ago today (March 23rd, 1982), Springfield released his Platinum selling album Success Hasn’t Spoiled Me Yet. The album reached number 28 in his native Australia, number 6 in Canada, and number 2 on the US Billboard Hot 200 album charts. It generated a number of hit singles as well.


Side one opens by “Calling All Girls”, a track that was popular enough to chart at number 4 on the US Mainstream Rock chart. It has strong guitar riffs from Springfield, Tim Pierce and Dennis Belfield that would appeal more to rock fans.

“I Get Excited”, the third single from the album, went to number 42 in Canada and number 32 on the US Billboard Top 40. The guitar riff on the verses reminds me a little bit of “Jessie’s Girl” from the previous album; as that song was a huge hit I am sure this was hardly coincidental. The chorus certainly draws from Springfield’s earlier pop success in the 70’s.

The second single “What Kind of Fool Am I” reached number 41 in Canada and number 21 on the US Billboard Top 40. This gentler, mid-tempo track reflects upon a failing relationship where the guy is regretting that he turned his back on it.

“Kristina” was the B-side to the third single. After two gentler numbers, Springfield and his band rock hard once more on this serenade to a lovely lady.

“Tonight” was the B-side to the first single. The song makes reference to Jessie, again a nod to the earlier hit.

“Black Is Black” is a cover of the 1966 Top 10 single from Los Bravos. Springfield’s is a bit more upbeat and lighter than the original.

Side two starts with the warning of “Don’t Talk to Strangers”. As the first single from the album, it went to number 10 in Australia, number 11 on the US Mainstream Rock chart, number 3 in Canada and number 2 on the US Billboard Top 40 where it stayed for four, denied the top spot by Paul McCartney and Stevie Wonder’s “Ebony and Ivory”. Of the three hit singles from the album, this one is definitely my favorite. I like the combination of the keyboards and guitars, and Michael Baird provides a very danceable drum beat. Lyrically, it was written by Springfield to his girlfriend, showing his paranoia that she was being unfaithful while he was away. I heard this one all over the radio back in 1982, and it is one that I find myself singing along to even to this day.

The B-side for the second single was “How Do You Talk to Girls”. The up-tempo track has a slight Caribbean sound to it thanks to the percussion.

Charles Sandford, who also played guitar on the album, penned the mid-tempo “Still Crazy For You”. Like the earlier “What Kind of Fool Am I”, we once again have a guy who realizes he is still in love with an ex and wants to try to get her back. I am sure Springfield’s strong female demographic of listeners enjoyed that. For me, it gets a little repetitive.

Speaking of that demographic, Springfield dedicates the next track to “The American Girl”, the unnamed and mysterious heartbreakers.

“Just One Kiss” is a rocker about love at first sight between two lonely souls. All it will take is just one kiss to remove all doubts and start something amazing.

The album closes with the short track (just over a minute and a half) entitled “April 24, 1981”. The date is significant as it was the day Springfield’s father Norman Springthorpe passed away.

I have always been a fan of Rick Springfield’s songs, especially the big radio hits of the 80’s. For me, the album Success Hasn’t Spoiled Me Yet is a bit of a mixed bag though. There are some songs I like a lot, and there are some songs I think could have been trimmed away to streamline the record a bit more. I think he’s at his best on the harder, rocking numbers, but I understand the sensitive, love songs were key in reaching his growing target of female soap-fans. He had to straddle a fine line at this point of his career.
Posted by Martin Maenza at 4:30 AM