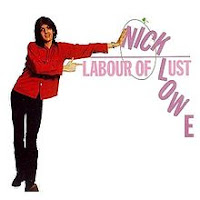 In 1979, Lowe released his second solo album Labour of Lust. While the name on the album is Lowe’s, the effort includes all of his band mates from Rockpile (Dave Edmunds and Billy Bremner on guitars and backing vocals, and Terry Williams on drums).


The track listings differed a bit from the original UK vinyl release to the first US vinyl release and then again to the 2011 CD release. For this review, I’ll be reviewing the songs in the US vinyl order.

Side one opens with “Cruel To Be Kind”, an across the board hit single. It went to number 12 in the UK, Australia, and Canada as well as on the US Billboard Hot 100. I have always loved this song; for me it has the perfect combination of melody, rhythm and vocal hooks. Whenever it comes on, I have to turn it up and sing right along with Lowe and the guys.

As a single release, “Cracking Up” went to number 34 on the UK charts. This song about losing it has bit of a blues rock guitar riff running through it.

I really like the rapid-fire rhythm to “Big Kick, Plain Scrap”; Williams keeps this one going at its steady pace. The lyrics talk of a woman that is hooked on drugs.

Elvis Costello guests with backing vocals on “American Squirm”, and his band mates from the Attractions (Bruce Thomas on bass and Pete Thomas on drums) also lend a hand.

“You Make Me”, a track under two minutes, is a stripped down, slow number that brings to mind Elvis Presley.

“Skin Deep” is a song all about sex, but leave it to Lowe to write about it in such a poetic, inoffensive way.

Side two starts with “Switchboard Susan”, a North America only single release; it charted at number 81 in Canada. This rocker is about a guy lusts after a telephone operator. It is kind of funny to think that today’s generation probably doesn’t get this song as phone operators have long since faded into the occupational landscape. When was the last time you used an operator to make a call? For me, it has been a couple decades easily.

“Dose of You” is a blues-rock number about being completely caught up in love as if it were some kind of communicable disease.

On “Without Love”, Lowe delivers a perfect rockabilly number about the all-encompassing properties of love.

The prominent harmonica on “Born Fighter” is provided by none other than Huey Lewis.

The final track, “Love So Fine” delivers another strong rocker.

The UK release did not include “American Squirm”. Instead it had the track “Endless Grey Ribbon”, a slower country and western track that was also the B-side to the US single release of “Cruel To Be Kind”.

There are two things that I enjoy about Nick Lowe’s music. First, and foremost, is his wit that shines through on creative lyrics. These are songs that you really need to focus on the words to get added appreciation. Second, is his skill at pulling elements from various musical genres and working with them with great ease. That makes his music varied and interesting for me. Labour of Lust does both of these things very well.
Posted by Martin Maenza at 4:30 AM