Richard and Linda Thompson - Shoot Out the Lights 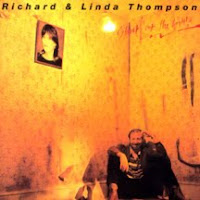 Tomorrow (March 15th) marks the 30th anniversary of the release of Shoot Out the Lights, the sixth and final studio album from the British husband and wife folk duo Richard and Linda Thompson. Due to complications, the couple soon split but remained a professional couple to get through the promotional tour for the album in 1982.

According to my research from Rolling Stone magazine, as of 2003 the album had sold just under a half a million copies. While many music fans might not remember this album (and I count myself in that category), the record was a critical hit. It appeared on many year-ending best of lists in 1982. Rolling Stone magazine ranked it at number 9 in its list of the 100 Best Albums of the 80’s and at number 333 on its list of the 500 Greatest Albums of All Time.


Side one begins with “Don’t Renege on Our Love”. I like the clean, simple composition to it with the urgent guitars, the steady drums and Richard’s accented vocals.

“Walking on a Wire” slows things down a bit with Linda providing the lead vocals here. She sings of the precarious nature of their relationship, how it has warn thin and become difficult to balance. I really like how they add all those extra syllables when they sing the word “falling” in the chorus.

“Man in Need” is very much a song about someone struggling to find new direction and purpose, so much so that the man walks out on his family at dawn. The song has a classic country-rock sound like the Eagles to it.

Linda again gets the slower number with “Just the Motion”, a gently swaying reassurance for when times are tough.

Side two starts with the title track. “Shoot Out the Lights” opens with some foreboding blues guitar riffs, setting a great mood for the song about an urban serial killer. It almost makes you want to welcome the comfort that darkness can sometimes provide.

“Back Street Slide” includes Richard on the accordion, something you don’t always hear in a rock track. It works very well here. The lyrics refer to the gossip that often comes when a couple is having problems; friends, family, even strangers are speculating on what is going on and what went wrong.

“Did She Jump or Was She Pushed?” is the only track of the eight on which Linda contributed to the writing. The song is about the tragic death of a woman, surrounded by unanswered questions. It could serve as a metaphor to Linda’s own music career at the time; she did come back as a solo artist a few years later though.

“Wall of Death” closes out the record. It is kind of ironic that Richard and Linda sing this one in a harmonious unison, ending the final record together when in fact their marriage had completely come apart.

As I mentioned earlier, I had not heard this album before listening to it for this review. I knew of Shoot Out the Lights from those aforementioned Rolling Stone lists but, without any pop radio hit singles that came from it, it completely was off my radar in 1982 and beyond.

That said I found this to be an excellent album. The Thompsons pulled me right into their music which sounds as fresh and poignant today as it would have thirty years ago. That is the mark of a classic album. In a lot of ways it reminds me of the work by Warren Zevon, another artist who I got into later in life rather than when the music was prominent. While I did not have it in my music library, that is something that I have recitified quickly (downloaded as soon as I finished writing the review). This one is too good to pass up. I’ve heard it once (thanks to Spotify) and look forward to hearing it again and again.
Posted by Martin Maenza at 4:30 AM