Salt-N-Pepa - A Salt With a Deadly Pepa 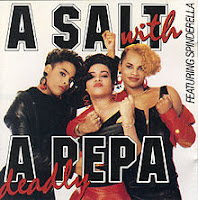 After their popular 1986 debut Hot, Cool & Vicious (click here for my review of that album), Salt-N-Pepa followed it up with 1988’s A Salt with a Deadly Pepa. The album sold as well as their debut, and reached number 19 on the UK charts, number 38 on the US Billboard Hot 200, and number 8 on the US Billboard R&B charts.


Side one opens with the brief “Intro Jam”. It pays homage to the beginning of “Computer Blue” by Prince from the Purple Rain soundtrack.

“A Salt With a Deadly Pepa” samples a bit from James Brown as well as other funk and jazz sources. This track mostly showcases Spinderella’s mad skills on the turntables rather than the raps of Salt and Pepa.

“I Like It Like That” has a groovy go-go swing that is made for dancing to. This is a signature style of the album’s producer Hurby Luv Bug, who also worked with Kid ‘N’ Play.

“Solo Power (Let’s Get Paid)” is a spotlight rap by Salt.

The first single “Shake Your Thang” went to number 29 in Germany, number 22 in the UK, number 4 on the US R&B charts and number 8 on the US dance charts. It features E.U., the Washington D.C. based go-go band Experience Unlimited. This one was a popular club hit in ‘88; it was a crowd favorite wherever I went out dancing that year thanks to the sample hooks it incorporated from the Isley Brothers’ 1969 hit “It’s Your Thing”.

Musically, the girls change it up with “I Gotcha” by pulling in a metal rock backdrop for their raps.

The side closes with “Let the Rhythm Run (Remix)”, an ode to percussion.

Side two starts with “Everybody Get Up”; as the second single it went to number 39 on the US Dance charts and number 14 on the US R&B charts. I like the chorus hook samples on this one as well as the lyrical gymnastics the gals are throwing down.

Salt and Pepa pay tribute to a key player of the group on “Spinderella’s Not a Fella (But a Girl DJ)”. I’ve always appreciated the cuts and scratches that Spin (Dee Dee Roper) laid down on these records.

Pepa (Sandy Denton) gets her own rap spotlight on “Solo Power (Syncopated Soul)”. This one has a more 60’s sound to it thanks to the slow, slinky samples.

The final single “Twist and Shout” only went to number 45 on the US R&B charts and 37 in Germany; however it went all the way to number 4 in the UK. The song, which gets its musical hook from the 1962 Isley Brothers’ hit by the same name (covered by the Beatles in 1964), has a wonderful groove to it. I’m rather surprised it didn’t do better on the US charts though.

The album closes with “Hyped on the Mic”.

In 1988, I was just out of college and working my first job. Salt-N-Pepa tunes were popular in the dance clubs and the singles were getting radio airplay. I picked up a copy of A Salt With a Deadly Pepa on cassette particularly for the singles. There are a number of solid tracks here; for me they work best in mixes with other artists to add variety. A little Salt-N-Pepa goes, just to season up the playlist, a long way.
Posted by Martin Maenza at 4:30 AM