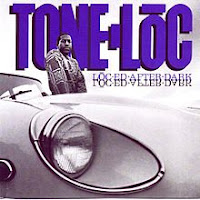 Born in Los Angeles, California, the rapper with the deep, gravelly voice made a huge musical debut with his 1989 album Lōc-ed After Dark. The multi-Platinum release went to number 1 on the US Billboard Hot 200 and number 3 on the R&B charts. Around the world, it reached number 11 in Australia and New Zealand, and number 22 in the UK. It earned him a number of nominations at that year’s MTV Video Music Awards, the Grammy Awards and the American Music Awards.


Side one opens with “On Fire (Remix)” which samples funk riffs from the 1970’s. Lyrically, the rap is a typical self-promoting one.

“Wild Thing” was the first single from the album. It went to number 2 on the Billboard Top-40 (denied the top spot by Paula Abdul’s “Straight Up”) and number 2 on the Rap charts; it did reach number 1 on the US R&B and Dance charts. Seeing as it was popular, “Weird Al” Yankovic did a parody of the song later that year called “Isle Thing” (referencing an obsession with reruns of Gilligan’s Island). The title is a mild, inoffensive reference to having sex. I can recall how big of a tune this was with the folks I was hanging with at the time. For a ski weekend that year, I made a mix tape that included a double-looping of this song (I edited it so that it seamlessly ran through the song twice for a long dance mix).

“Lōc-ed After Dark” loops a solid mid-tempo beat as he stakes his claim as a rapper with who is not to be messed. This is one of the tunes that earned the album a warning label due to language. I do like the old school scratching that is added to the later part of this song.

“I Got It Goin’ On” was the third and final single; it failed to make any dents in the charts in the US or elsewhere. Unlike the other two singles, this one really did not have a solid hook to pull the audience in time and again.

“Cutting Rhythms” closes out the side with a slower tempo for him to rap around. The extra spotlight here is the various rhythms his deejay cuts in as bridges between verses. Some of them are very familiar to someone like me who listens to a lot of music.

Side two starts with “Funky Cold Medina”. This second single went to number 3 on the US Top-40 and the US Rap charts. The song is about a fictional aphrodisiac that works as an instant love potion on whoever drinks it. The track includes samples from the Rolling Stones (“Honky Tonk Woman”), Foreigner (“Hot Blooded”), KISS (“Christine Sixteen), Free (“All Right Now”), Bachman-Turner Overdrive (“You Ain’t Seen Nothing Yet”) and Van Halen (“Jamie’s Cryin’”). I’ve always liked the references to the late 80’s beer commercials that he includes in this one.

Tone enumerates a series of evening exploits in “Next Episode”.

Tone uses the next track “Cheeba Cheeba” to pay homage to marijuana which he seemed to thoroughly enjoy.

“Don’t Get Close” is a warning by Tone to all other rappers in a typical battle-rap manner. I like the saxophone and jazz piano samples that are used on this one. It shows how he drew from a variety of musical sources with which to throw his rhymes down.

“Lōc’in on the Shaw” reminds me of a 70’s Blaxploitation film, very urban and gritty. It is a welcome change up at this point in the album. The track is mostly an instrumental loop with hardly any vocals.

“The Homies” closes the album out with a shout out track by Tone to his partying buddies. It sounds like he recorded this one directly at a gathering with most of the guests half-lit.

I owned a copy of Lōc-ed After Dark on cassette back in 1989. I was a huge fan of the hit singles, having heard them all over the radio, on MTV and in the clubs where I went dancing on weekends. For me, this was an okay hip-hop album with a few outstanding tracks. Tone Lōc’s rap style was enjoyable to listen to when I was in the mood for this genre of music. I definitely found the production value to be solid on this one and the way his deejay mixed the music was seamless.
Posted by Martin Maenza at 4:30 AM