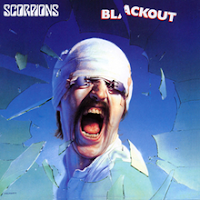 In March of 1982, the German heavy-metal band Scorpions released its eighth studio album.

The Platinum selling Blackout went to number 12 on both the charts in both Switzerland and Finland, number 11 in both the UK and Canada, number 10 in both Germany and on the US Billboard Hot 200, and number 1 in France.


Side one begins with the title track. “Blackout” wastes not time getting us right into the music thanks to its driving drums of Herman Rarebell and the steady guitars of Matthias Jabs, Rudolph Schenker and Francis Buchholtz. And I can’t forget the unique vocal sounds of Klaus Meine. The glass shattering at the end is a nice touch as it mirrors perfectly with the album‘s cover art. This song is a great way to kick off the record.

The second single was “Can’t Live Without You”; it reached number 63 in the UK, number 47 on the US Mainstream Rock charts and number 17 in France. This track keeps up the high energy, in your face attitude that I like in my metal music.

“No One Like You”, the first single, went to number 64 in the UK, number 65 on the US Billboard Hot 100 and number 1 on the US Mainstream Rock charts. I remember this one fondly from the early days of MTV; the video got a lot of airplay and made that opening guitar riff easily identifiable. The song also became a popular slower dance tune as school functions (those guitar grinds were perfect for teens who wanted to get close).

“You Give Me All I Need” too opens with a slower verse. The tempo eventually builds a bit to the chorus.

After two ballads, the Scorpions get back to throwing down with “Now!” The song reminds me a bit of Led Zeppelin in spots.

Side two explodes with “Dynamite”, a sexually charged tune. This reminds me a little of their later tune “Rock You Like a Hurricane” which is my favorite from the band.

“Arizona” is a jamming ode to a geographically named woman.

“China White” has a solid, heavy groove thanks to the combination on the guitars. This is the longest track on the album, clocking in at close to seven minutes. It gives the band plenty of room to really work this one well.

The album closes with “When the Smoke Is Going Down”, a beautiful ballad that lets Meine really ring out the emotions.

I was in my junior year of high school when the Scorpions released Blackout . While I did not have a lot of metal in my vinyl collection, my best friend John certainly did. This album was right up his musical alley and we’d listen to this one while we hung out at his house on weekends. I think 30 years later it holds up well. There is no denying this band had a really tight sound and delivered it with clean precision.
Posted by Martin Maenza at 4:30 AM