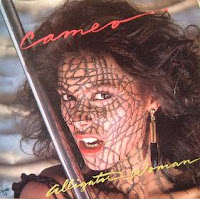 1982’s Alligator Woman features Denise Matthews, also known as Vanity, as the cover model. The album was certified Gold in the US, reaching number 23 on the Billboard Hot 200 and number 6 on the Billboard R&B charts.


Side one begins with “(Just) Be Yourself” which was also the first single. It came up short of breaking into the US Billboard Hot 100 (it stopped at 101) but did reach number 12 on the Billboard R&B charts. The guitars by Charlie Singleton and bassist Michael Burnett start things right off on a funky note. This is anthem of individuality is a solid dance groove.

Get ready to be drafted into the “Soul Army”. Nathan Leftenant’s trumpet plays the revelry on this jamming call to arms. I dare anyone to not be moved to groove by this one.

The second single, “Flirt”, went to number 10 on the US Billboard R&B charts. Larry Blackmon’s percussion drives this one all over the dance floor, and the synthesizers have a twinge of new-wave to them to boot.

The party continues with the mid-tempo groove of “Enjoy Your Life”. Its message is one of positive vibes and optimism.

Side two kicks off with the title track. “Alligator Woman”, the third and final single, stalled at number 54 on the US Billboard R&B charts. This one has a rocking rhythm mixed into the funk to give it a frantic, urgent tempo.

The transition to the next track, “Secrets of Time”, is immediate even though the two tracks are as opposite as can be. This one has a slower tempo and smooth harmonies between Singleton and Blackmon. This one almost borders on the gospel genre.

The slower ballad tempo continues with “I Owe It All to You”, Blackmon pulls out his trademark falsetto on this seductive love song that he wrote solo.

Singleton takes the lead vocals for the final ballad “For You”, the one track he penned solo on this album.

In the early 80’s I was not listening to any R&B radio stations; the closest one we might have gotten would have been out of Buffalo, NY, over an hour away. So, I did not discover the grooves of Cameo until 1986 when they had a couple hits cross over into the Top 40. Discovering Alligator Woman today, I realize I have been at a serious loss for the last 30 years. I would have so gotten into this album back in 1982 had it crossed my radar. I definitely need to make up for lost time and get me some of this fantastic funk into my music library ASAP.
Posted by Martin Maenza at 4:30 AM

Wow, I don't even remember this! Was totally off my radar.

That's one thing I am enjoying about focusing on 30th anniversary albums from 1982 this year. I get to listen to a number of things I might not have heard otherwise. "New" music is good for the soul.