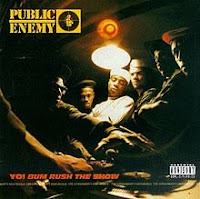 The roots of the rap/hip-hop group known as Public Enemy stem from New York City in the early 80's. Chuck D and Flavor Flav started out as local MCs trying to make a name for themselves; Chuck D had a demo tape called Public Enemy #1 which is where the group’s name would eventually come. The duo hooked up with the Bomb Squad (Hank and Keith Shocklee and Eric “Vietnam” Sadler), Professor Griff and a local DJ named Terminator X.


After spending time as an opening act for the Beastie Boys, Public Enemy released their debut album Yo! Bum Rush the Show in 1987. The record peaked at number 125 on the US Billboard Album charts and number 28 on the Black Album charts. Rolling Stone magazine ranked it number 497 on its list of the 500 Greatest Albums of All-Time.

Side one opens with Flav and Chuck D on the run in the latter’s Oldsmobile 98 in “You’re Gonna Get Yours”. I like the samples and cuts on this one - very funky. The track is a very promising opening for the record.

Guest Vernon Reid of Living Colour provides some guitar on “Sophisticated Bitch”, an ode to a social climber who pretends to be something she is not.

“Miuzi Weighs a Ton” relies on a heavy beat that reminds me of the earliest days of rap. The song falls right into that category where the rapper boasts about his rhyming skills and more.

The first references to Flav‘s catch phrases relating to time comes from “Timebomb”.

Flav takes the lead vocals on “Too Much Posse”, a straight-forward rap set against a steady drum beat.

“Rightstarter (Message to a Black Man)” features smooth scratching and some funky samples from Trouble Funk and Run-D.M.C. Together, that makes this a very danceable track.

Side two begins with “Public Enemy No. 1”, a declaration of intent to be the best rappers around.

“M.P.E” continues singing the praises of being a Public Enemy.

“Yo! Bum Rush the Show” is about being up on stage with a very energized audience.

The next track “Raise the Roof” encourages the crowd to make some noise as they enjoy the show.

The rhythm and backing vocal deliveries are more mechanical on “Megablast”. The track also features some backward masking near the end.

The album ends on a funky note with “Terminator X Speaks With His Hands”, a track that allows their spin-master do his thing with cuts and scratches.

This was the first time I had heard Yo! Bum Rush the Show. While I was into a good bit of early rap, Public Enemy was not one of those groups I gravitated towards. Still, I found this one to be a good listen and will likely seek out more of their stuff to sample in the future.
Posted by Martin Maenza at 4:30 AM