Men Without Hats - Rhythm of Youth 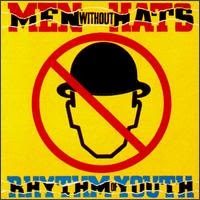 Today (March 20th) marks the 30th anniversary of the release of Rhythm of Youth, the debut album from the Canadian synth-pop band Men Without Hats.

At the time of this 1982 release, the band consisted of brothers Ivan and Stefan Doroschuk as well as percussionist Allan McCarthy.


Side one begins with “Ban the Game”. I like the simplicity of this short track with Ivan’s vocals accompanied by the piano. Its brevity leaves me wishing it were a lot longer.

Next up was the band’s huge hit and signature song “The Safety Dance”. This second single went to number 11 in Canada, number 6 in the UK, and number 3 on the US Billboard Top 40. Lyrically, the song was a protest against club bouncers who stopped dancers from pogoing. The very memorable music video, which was hugely popular on MTV at the time, went the route of an English medieval folk revival complete with a puppet show and maypole. The echoing effect at the start with the spelling of safety and the dit-dit-dat of the keyboards is very cool. I had this single and played it a lot; it was a very popular dance song during my later high school years.

“Antarctica” has a hauntingly cold, synth beat to it. It is fitting for this ode to the icy continent. I can almost picture the winds blowing relentlessly across vast, snowy landscapes.

The interesting musical sounds continue with “The Great Ones Remember”.

The third single “I Got the Message” charted at number 99 in the UK. With its bouncy beat and the playing off one another effect between the lead and backing vocals, this is definitely an under-rated 80’s tune. The album gets its title from one of the lines of this song.

Side two starts with “I Like”; as the first single from the album it reached number 84 on the US Billboard Hot 100. To me, it represents someone questioning the group mentality mindset of those that parrot certain views and styles just to fit in. It stresses the importance of individuality.

“Ideas for Walls” has a rapid-fire rhythm to it that doesn’t let up.

“Things in My Life”, with its funky groove, reflects upon the various aspects that make up your existence, some things we remember and some things we forget.

“Cocoricci (Le Tango des Voleurs)” is sung entirely in French. The title refers to the dance of thieves wherein one person tries to convince another to steal his father’s car.

“The Great Ones Remember (Reprise)” is a shorter instrumental revisit to the track from the first side.

The UK release of the album had a slight different track order and included one more song. “Living in China” makes a commentary on the large Asian nation; I really like the creativity with the various references put into the lyrics here.

I can recall at the time Rhythm of Youth was released in 1982 that I first heard a number of these songs on the local college radio station. I was familiar with about half the album before the popularity of “The Safety Dance” took off very late that year. I rather enjoy the unique sound of Men Without Hats, the combination of the strong synth sounds and Ivan’s very distinctive vocal sound. They most definitely were much more than just the one-hit-wonder label that so many have given them over the decades.
Posted by Martin Maenza at 4:30 AM