The Jam - The Gift 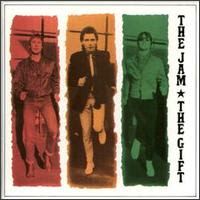 Today (March 12th) marks the 30th anniversary of the release of the Jam’s sixth studio album The Gift. Despite being the British band’s final studio album before their breakup later that year, it was one of the group’s best selling efforts. While it only went to number 82 on the US Billboard Hot 200, it went to number 22 in Canada, number 14 in the Netherlands, number 10 in New Zealand, and number 1 in the UK (a spot it held for three weeks amidst a top spot run by Barbara Streisand‘s Love Songs).


Side one opens with “Happy Together”, a very poppy track that is so far from the band’s early punk roots. The Jam consisted of a trio with Paul Weller on vocals and guitar, Bruce Foxton on bass and backing vocals, and Rick Buckler on percussion; they do get some additional help with horns to fill out the sound on the album.

“Ghosts” is a short song about those things people keep hidden inside of them. It has a slower tempo punctuated by backing horns and hand-claps.

“Precious” was part of a double A-side first single which went to number 19 in Canada, number 15 in Australia and number 1 in the UK. I am very much a fan of the funky, wah-wah guitars on this track and others on the album. The Jam does the Sixties soul sound very well. As the longest track on the album, just over four minutes, they do get some space here to work out the groove.

“Just Who Is the 5 O’Clock Hero?” was the second single; it reached number 8 on the UK charts. The lyrics tell of a factory worker who toils from nine to five everyday to support his wife. When he gets home, he wants to just watch the evening television to escape the daily drudgery.

The drums and guitars on “Trans-Global Express” really give the impression of a train rolling down the rails. I like the effects a lot. The lyrics are very much a social commentary of things in Britain at the time and how everyone needs to come together to make for a better tomorrow.

Side two begins with “Running on the Spot”, a song about the stagnation of a generation.

“Circus” is the only track on the album not written by Weller; this one was written Foxton. As such, this instrumental track has an incredibly heavy bass line to it. Buckler gets in some really solid percussion too.

“The Planner’s Dream Goes Wrong” has a bit of a reggae sound. The pleasant island swing contrasts the lyrics that deal with an urban renewal project that completely fell through. The people who end up suffering are those that would have had a better place to live.

“Carnation” is about a very bitter man who will never change despite the kindest of gestures extended to him. It is a very dark song with a bit of an upbeat sound. Again, contrasts between words and music.

“Town Called Malice” was the other half of the double A-side first single. Weller has said the song was written about his hometown of Woking which is located west of Surrey, UK. The residents work hard to better their lives but things are still hard for them. This is definitely my favorite track from the album. I love the tempo and the organ on this track. I can remember hearing it on the local college radio station that I listened to while I was still in high school in 1982.

The side closes with the title track “The Gift”, a track about not settling for things as they are. As Weller sings, you have to keep moving and make the most out of every day.

It has been said that the various experiments in musical genres on The Gift is part of the reason the band broke up so soon after the album was released. I find it a shame they went their ways after this release. Looking at it, the whole record has a consistent thematic structure. Both sides end with tracks to offer some answers to the plight of the British workers.
Posted by Martin Maenza at 4:30 AM