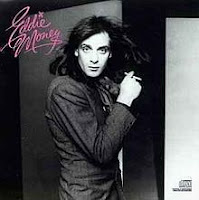 After a couple years as an officer with the NYPD, Money decided to pursue a music career. After playing in small venues around California for almost a decade, he met music promoter Bill Graham who felt the performer had what it took to be a big recording artist.


In December of 1977, Money released his self-titled debut Eddie Money. The album reached number 37 on the US Billboard Hot 200. It went to number 24 in Canada. In both countries it was certified as Platinum.

Side one opens with “Two Tickets to Paradise”, the second single from the album. It charted at number 22 on the US Billboard Top 40 and number 14 in Canada. The lyrics are about Money’s girlfriend at the time whose mother did not want her to marry a musician. The song was his plea for the two of them to get away to start their own life. I’ve always liked the opening guitar riff as it reminds me of a car speeding down the road at night.

Next up is a cover of the 1962 hit by Smokey Robinson and the Miracles “You’ve Really Got a Hold on Me”. Money’s version was the third and final single, only reaching number 72 in the US and number 63 in Canada. I really like his take which alters the tempo a bit and emphasizes more of the rock aspects rather than the original soul elements. And, of course, I like the saxophone solo.

“Wanna Be a Rock ‘n’ Roll Star” is full of classic rock hooks and sounds, including Tom Scott on the saxophone and a driving drumbeat by Gary Mallaber. The lyrics express the dream of every garage band musician: that hope to some day make it big. This album was the start of Money achieving that dream.

“Save a Little Room in Your Heart for Me” slows the tempo down once more. This heart-felt ballad really showcases Jimmy Lyon on guitar and Lonnie Turner, formerly of the Steve Miller Band, on bass.

The percussion and guitars on “So Good to Be in Love Again” have a funky groove to them, making a stripped down dance song without all the added orchestration that came with disco songs at the time.

Side two begins with “Baby Hold On”, the first single from the album that went to number 11 on the US Billboard Top 40 and number 4 in Canada. Money co-wrote the track with Lyon and features Jo Baker as the second vocal. This one has a catchy, clap-along element that you just don’t hear in music so much any more.

“Don’t Worry” is a laid back jam that combines the sax, drums and guitars very well on its opening. The song is all about taking time off from the hurried day-to-day routine to take time to smell the roses.

With its odd spelling (the “y“ should change to an “ie“ when going plural), “Jealousys” delivers a message of peace, open communication and understanding, on both a personal one-on-one and a world-wide political scale.

“Got to Get Another Girl” has another funky, almost blue-like guitar line that drives the song. The band really gets a chance to jam on this one; I bet it was a great song for them to do live with lots of improvisation to it.

“Gamblin’ Man” closes the album with a rousing rocker. The lyrics talk about a man who takes risks on everything: with cards and dice, on the horses, and in love.

Thanks to two Top 40 hit singles, I was very much aware of Eddie Money right out of the gate in 1978. Yes, I was still very much heavily into my disco phase during these junior high school years, but something about Money’s classic rock ‘n’ roll style appealed to me as well. Eddie Money is a decent debut album with very tight music.
Posted by Martin Maenza at 4:30 AM

I like "Take me Home Tonight" by him, I haven't heard any of his other songs but, I bet they're good too. Great post, thanks for sharing! : )

Thanks for reading. I think you will enjoy more tracks from Eddie. Some classic stuff there.