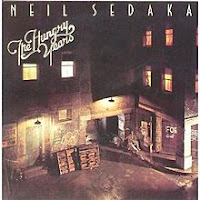 Growing up, I can fondly remember hearing the classic 60’s songs by Sedaka on the radio, both ones he recorded himself and those he wrote for others.

In 1975, he released his second album on Elton John’s Rocket label. Hungry Years was the American edition of his earlier release Overnight Success on the British Polydor label. This continued his renewed presence on the US Billboard charts after a decade-long absence period from 1964 to 1974.


Side one opens at a “Crossroads”. Accompanied by a bouncy piano line and some funky strings, Sedaka faces a focal point in his life where change is about to throw him on a new course. I like the false stop near the end.

“Lonely Nights (Angel Face)” is next, an ode to a love that he can’t get out of his head. She haunts his evenings and causes him to lose sleep. The Captain and Tennille covered this song for their second album in 1976, which as a single went all the way to number 3 on the US charts.

“Stephen” is Sedaka’s tribute to Stephen Foster (1826-1864) who is known by many as the father of American music. The banjo is used in the number as a reference to the instrument Foster often composed on.

“Bad Blood” spent twelve weeks on the US Billboard Top 40, including three weeks at the number 1 spot. Elton John provided an unaccredited backing vocal on the track which helped add to the song’s popularity. The song was later dethroned from the top spot by John’s own “Island Girl” single. I really like the funky rhythm to this one with its ca-chunk ca-chunk to the piano, guitars and percussion. Listening to it takes me right back to the summers of the 70’s.

In 1998, the song “Bad Blood” resurfaced in a first season episode of That 70’s Show. There is a scene where Eric Forman and his mother Kitty sing along to the song when it comes on the car radio (something I can relate to - I often sing along to this song when I hear it). One of the three creators of the show, Mark Brazill, came from the same hometown as I did - Dunkirk, NY. He was a senior during my freshmen year of high school.

“Your Favorite Entertainer” was the B-side of the single “Bad Blood”. The song is about those who idolize a musician so completely that it takes over their every emotion.

“Baby Blue”, a song about a woman totally fascinated with a man who will likely use and discard her, has a pleasant dance beat to it.

Side two starts with “Tit for Tat”, a song about not being taken for granted in a relationship. It is fun little take on “what’s good for the goose is good for the gander”.

Sedaka next looks to his own backyard for “New Your City Blues”, a look at the hard times that the Big Apple had been experiencing. The lyrics really paint a vivid picture and the music sets a superbly solemn mood.

“When You Were Lovin’ Me” is another reflective song about former lovers and what might have been. The gospel singers in the background are an effective touch.

The title track “The Hungry Years” is next. This beautiful ballad is a song to his wife Leba who was with him during his meteoric rise in the 60’s and then supported him for the musical dry-spell that followed after.

The album closes with a remake of his 1962 number 1 hit single “Breaking Up Is Hard to Do”. Where as the original was an upbeat pop song, this time Sedaka slowed it down to a jazzy ballad (an arrangement that was first used on David Cassidy‘s Cassidy Live! album in 1974). That change up worked very well as the song spent eleven weeks in the US Billboard Top 40, topping out at number 8, and it also made it to number 1 on the US Billboard Adult Contemporary charts.

I think The Hungry Years is an excellent pop record, a collection of eleven enjoyable tracks. Sedaka knew how to write catchy songs with rich musical structures. While I have a few of these tracks already in my music library (thanks to hits collections), I would most definitely fill in the deeper tracks if they were available for download. As it is, I was lucky to be able to find them all to listen to over on YouTube. Good music like this should definitely be accessible for newer fans to discover and older fans to get back in touch with after all these decades.
Posted by Martin Maenza at 4:30 AM