Tracey Ullman - You Broke My Heart In 17 Places 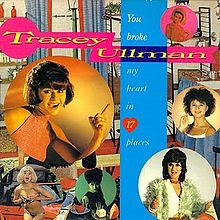 Before she got into her comedy career on television and film, Tracey Ullman was a singer and dancer in a number of West End musicals in London. Stiff Records label found her style interesting and released her debut album You Broke My Heart In 17 Places on November 25th of 1983. The album peaked at number 14 on the UK charts; three of the singles also scored well on the UK charts. In the US, the album went to number 34 on the Billboard Hot 200.


FYI, this review is done in the order of the tracks of the original US vinyl listing. I know the CD releases shuffled the tracks around a bit. What can I say - I am a purist.

Side one begins with “Breakaway”, the first single from the album. It reached number 4 in the UK and number 70 on the US Billboard Hot 100. The song, which was originally recorded by Irma Thomas in 1964, tells of a woman who can’t find the strength to leave an abusive relationship. I like the song a lot as it is delivered with a full-steam-ahead clap-along rhythm and classic girl-group backing vocals. It made for a great dancing workout back in the day.

“They Don’t Know”, one of two tracks penned by Kirsty MacCool (who had a number 2 hit in the UK with it in 1979), was the second single. Ullman’s version also went to number 2 on the UK charts; in the US it went all the way to number 8 on the Billboard Top-40 a year later (thanks to a very popular video for the song that ran on MTV and featured a cameo by Paul McCartney). Along with the first track, this one is definitely one of those often-forgotten 80’s gems.

“Bobby’s Girl” was originally written by Gary Klein and Hank Hoffman in the early 1960’s. Though Bobby Rydell had a hit with it in 1963, it was recorded by both Marcie Blane and Susan Maughan in 1962. Ullman sticks to a classic sound on this one, but a driving beat is incorporated into the chorus.

The Dells had a Top-10 hit with “Oh, What a Night” in 1969. Ullman’s version is more pop than soul, again mapping it over to a girl-group sound.

The third single “Move Over, Darling” went to number 8 in the UK. The original song appears in the 1963 Doris Day film of the same name. The cover here manages to spruce up the then twenty-year-old tune a bit for a new generation.

Side two starts with “I Close My Eyes and Count to Ten”, a 1968 hit in the UK by Dusty Springfield. Ullman was one of two artists to cover the song in 1983 (the other being Paul Young). I like the piano accompaniment and the dramatic horn section; they both help Ullman perfect the role of the harried heroine on this one.

Sandie Shaw recorded “Long Live Love” in 1965, taking it all the way to number 1 in the UK. Ullman’s version has a jazzy swing complete with a powerful horn section that brings to mind the pop music of that era.

“(I’m Always Touched by Your) Presence Dear” was written by bass player Gary Valentine and appeared on Blondie’s 1977 album Plastic Letters. Ullman does a good job on the vocals, adding her own nuances to make the performance different from Debbie Harry’s original.

“Shattered” is a slow ballad about a broken relationship. Ullman delivers the vocals with just the right touch of melancholy.

Stiff Records artist MacCool also penned “You Broke My Heart in 17 Places”. Of all the tracks, this one is actually my least favorite. It just doesn’t do it for me like the others do.

In 1974, a group of studio musicians under the name of Reunion recorded “Life Is a Rock (But the Radio Rolled Me)” which went to number 8 in the US and number 33 in the UK. The song is a rapid-fire listing of various musicians, songwriters and record labels from the 1950’s to 1970’s. I have both the original version and Ullman’s in my music library. I think she does a solid job on this cover, clearly enunciating every name that is dropped with her cute English accent.

I’m a big fan of cover songs when they are done in such a way that they add something to the original or provide a different take. Tracey Ullman does just that on You Broke My Heart In 17 Places. The 60’s songs chosen were ones that, for this American teenager in the 1980’s, were not fairly well-known. Therefore, Ullman’s interpretations sounded very fresh and interesting. And her voice worked perfect for the retro-pop sound as well. All together, it makes for an enjoyable listening experience.
Posted by Martin Maenza at 4:30 AM