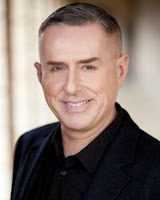 Born in Liverpool, England, Johnson started out as a bassist and vocalist in the punk-rock/new-wave band Big In Japan in 1977. That gig lasted for two albums and two years.

From 1980 to 1987, he served as lead singer and lyricist for the band Frankie Goes to Hollywood.

Since the mid-90's, he has worked as a painter with his artwork exhibited in places such as the Royal Academy and Tate Liverpool gallery. He has also been a contributor to the monthly magazine Modern Painters.

Johnson can be found interacting with friends and fans on his Twitter and Facebook pages. He also posts occasional new music on ReverbNation.

To read my reviews of his work with Frankie Goes to Hollywood, see the links below:

- for their 1984 debut smash Welcome to the Pleasuredome, click here

- for their 1986 second and final album Liverpool, click here
Posted by Martin Maenza at 4:30 AM