Willie Nelson - Always on My Mind 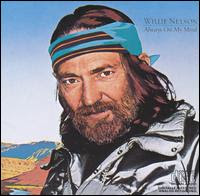 On February 28th of 1982, Willie Nelson released Always on My Mind, a mix of original songs and covers of some known classics. The album spent ninety-nine weeks on the US Billboard Hot 200 charts, including three weeks at the number 2 spot. On the US Billboard Country charts, it spent an impressive 253 weeks on the charts, which included a total of 22 weeks at the number 1 spot. Given both of those runs, it is no surprise that it became Billboard’s number 1 country album for 1982. In the thirty years since its release, it was certified Platinum multiple times over in the US and in Canada (it reached number 20 on the Canadian charts).


Side one starts with "Do Right Woman, Do Right Man", a gentle ballad that attempts to give strong relationship advice. The song is very laid back with a small guitar solo about midway through.

The title track is next which was a song originally recorded by Brenda Lee in 1972. Nelson‘s version of "Always on My Mind" spent twenty-one weeks on the Billboard Country charts, including two weeks at number 1. It also crossed over and three of its twenty-three weeks at the number 5 spot on the Billboard Top 40. I have always liked the piano melody on this one.

In 1967, Procol Harum had a hit with "A Whiter Shade of Pale". Nelson covers it here, giving us a third mellow track in a row. I have to admit that this version takes a bit of getting used to. It is hard to beat the original, though Nelson and guest Waylon Jennings give it a try.

Next up is another cover song, this one of a 1960 Everly Brothers classic "Let It Be Me". As the second single, Nelson's version went to number 2 on the Billboard Country singles chart and number 1 on the Canadian adult contemporary chart. At the Grammy Awards, it won three prizes: Song of the Year, Best Country Song, and Best Male Country Vocal Performance. I like the saxophone on this one, very slow and sweet as is fitting for this ballad.

"Staring Each Other Down" closes out a very mellow first side. I like how the piano and the steel guitar play off one another here.

Side two opens with a cover of the 1970 Simon and Garfunkel classic "Bridge over Trouble Water". Nelson puts his own vocal style to this one with fair results.

Time for an original song, though "Old Fords and a Natural Stone" does not bring the tempo up too much more than the earlier six tracks. This one waxes on about how nothing lasts forever. The saxophone gives it a nice blues sound.

"Permanently Lonely" is one of two tracks written by Nelson on the album (the other is the final track). The song sets a melancholy mood from the opening notes.

As the third single "Last Thing I Needed First Thing This Morning" went to number 2 on the Billboard Country singles chart and number 1 on the Canadian country chart. The lyrics tell of a day where everything is going wrong including his woman walking out on him. I enjoy the guitar work on this one.

"The Party's Over" closes out the side and record. It is actually the most up-tempo track on the entire record. I really would have liked a few more tracks in this vein and then some to even out this record a bit.

In 1982, I did not listen to a lot of country music. Sure, I liked the occasional songs that crossed over into the Top 40 charts and such, but country was not a genre I general sought out full albums for. At age 17, I was looking more for upbeat, fun music. Always on My Mind is very much a quiet, introspective album with Willie Nelson taking on quite a few classics. Even today, as I am almost thirty years older, this one is a little too quiet for me. It is a good album - I am just not the right audience.
Posted by Martin Maenza at 4:29 AM

Someone gave a me a mint copy of this on vinyl. I am a fan of Willie, at times more for his whole persona than artistic output. While I remember the huge success of "Always on my mind", and the recognition this album received, I was startled at how low key and somewhat depressing a collection this turned out to be. Your review nails it perfectly.