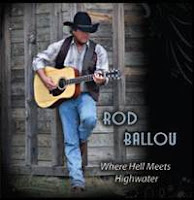 One of the things I like about being online in places like Twitter and with my blog is discovering new music that I wouldn’t hear otherwise. Another recent example of that was my getting to know a country artist from Frisco, Texas.

Rod Ballou has always been fascinated by music. He purchased his first guitar at age twelve. After college, he got married, started a family and settled into a career in carpentry. Still, music dreams kept resurfacing and today he is trying to make that dream a reality. His debut CD is called Where Hell Meets Highwater.


“All I Needs Is a Road” is the first single which is getting some airplay on country stations. The lyrics tell of getting away from it all, hitting the highway and opening a new chapter in life somewhere else. Producer Chip Martin assists on this one with the distinctive sound of the mandolin.

“30 Miles West of Wichita” is a look back fondly at life in a small town growing up. It reminds me of my own childhood, growing up in the north in the 70’s when life was simpler and innocent. Rod and I are about the same age (seven years apart), so there is that shared view of hometowns and going back after being away after so many years.

“Gramma’s Got a Lover” is a surprisingly fun song. None of us ever want to think of our grandmother going out on the town and finding herself a new man, but Rod really makes it work with this up-tempo tune. Trust me; the catchy hooks will get stuck in your head.

“It’s All in How You Look at It” has a great message to it. We all have a choice every day, in every circumstance that we find ourselves in. As the lyrics say, we decide to see it as a burden or as a gift. They’re words to live by.

“What If” has a gentle melody that just washes over me. It reminds me a bit of tunes by Bertie Higgins back in the early 80’s.

“100 Beers” is a quick-step tune about drowning one’s sorrows in hopes to put an end to a broken heart. I like the fiddle solo by Jason Roller on this one.

“I’ll Turn the Lights Off” paints a sad, final portrait of a relationship that failed.

I don‘t think anyone would argue with the lyrics of “Broke Ain’t Fun”. Rod puts an up-tempo spin on struggling to get by, a motivational kick in the pants to improve one’s lot in life.

As a father myself, I really like “5 O’Clock Shadow”. It reminds me of the days when my son was very young, always following me around and wanting to try to help with whatever I was doing. Those days are so precious. They grow up so fast.

“Where Hell Meets High Water” is all about living a life on the edge and consequences that eventually catch up to you. I really like the guitar playing on this one.

The final track on the CD is an acoustic version of “What If”.

I am enjoying Rod’s music quite a bit. He has a wonderful knack at songwriting and I really like the sound of the songs. They are very honest and accessible. And Rod’s voice is like that of an old friend, someone you want to spend time hanging out with and sharing stories. In a lot of ways, his music reminds me of the crossover country sounds of the 70's and early 80's - songs that would appeal to a wide listening audience.

You can get in touch with Rod Ballou a number of ways. Go to https://twitter.com/#!/RodBallou if you would like to follow him on Twitter. To listen to all the songs from this album you can go to http://www.reverbnation.com/fan/control_room/1499465#!/rodballou which is his ReverbNation page. And, if you like what you hear, just go to http://www.rodballoumusic.com/ which is his website to order a CD or download tracks from his store. There you can also keep up with the latest on where he might be performing and such.
Posted by Martin Maenza at 4:31 AM