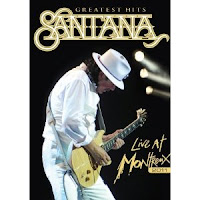 Just released by Eagle Rock Entertainment is a two-disk DVD set of a live performance by Santana, recorded in Montreux, Switzerland, in July of 2011.

The show and Santana go together like peanut butter and jelly. The Santana band got its big break by playing Woodstock in 1969. Two years earlier, Claude Nobs established the Montreux Jazz Festival, an annual celebration of music from around the world.

The two came together when Carlos Santana played the festival in 1970, and that was the beginning of a long standing relationship.


The full running time of the 2011 show (twenty three songs in total including all of the big hits like “Evil Ways”, “Black Magic Woman”, “Oye Como Va”, and the more recent “Smooth” and “Maria, Maria”) is 204 minutes. That is well over three hours of amazing music and more.

The band really puts on a fantastic show which spotlights Latin rhythms and world music with a rock blend. Some of the highlights include the spotlight performance by Benny Rietveld on bass and Cindy Blackman Santana on drums (her solo in the first hour gives the rest of the band a well-deserved break) and Dennis Chambers drum solo in hour two.

And, of course, there is the phenomenal guitar playing by Carlos Santana himself. I am blown away by how he rings out the notes on his electric guitar. He is truly one of the masters and, as this concert demonstrates, he shows little signs of slowing down as he moves into his fourth decade of performing. Clearly, the man loves music and sharing that passion with the audience.

There are three bonus features on disk two.

The first is an insightful interview with Carlos Santana. He is a very spiritual man, and from this you really get an understanding of what the music and life means to him. He sounds like someone you'd want to hang out with and just get to know.

Next up is an interview with his wife Cindy. She got her starts working with Lenny Kravitz. She talks about when she first met Carlos and how the two share a common spiritual base. Having only been together for a year at that point and married for six months, they are still in that honeymoon period.

The final extra is a behind the scenes look at the performance, the festival and the rest of the band.

If you're a fan of great music and live concert performances, you owe it to yourself to check this DVD out.
Posted by Martin Maenza at 4:29 AM