Bronski Beat - The Age of Consent 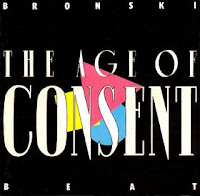 While sharing a flat in Brixton, Bronski along with Jimmy Somerville and Larry Steinbachek began to play music together as Bronski Beat. After doing under a dozen live gigs, they were signed to a recording contract with London Records.


After the release of a couple successful singles, their debut album The Age of Consent was released in October of 1984. The Platinum selling album in the UK went to number 4 on the charts there; it also reached number 5 in New Zealand, number 7 in Switzerland and number 36 in the US. The inner sleeve of the original vinyl release listed the ages of consent for male homosexual activity in different nations around the world; this information was removed from the US release by MCA Records.

Side one opens with a voice shattering vocal by Somerville and a question: “Why?” This was the group’s second single which went to number 6 in the UK. This pumping, energetic dance track delivers a message of anti-homosexual prejudice amid some great synthesizer hooks and a driving beat.

The third single, “Ain’t Necessarily So”, was released right around the time the album came out; it went to number 16 in the UK. The original version appeared in the Broadway opera Porgy and Bess by George and Ira Gershwin. The lyrics question the authenticity of a number of Biblical tales. Somerville is backed by the Pink Singers, an openly gay male choir from London, and the song also features Arno Hecht on the swinging clarinet solo at the start. I think it is an interesting choice for a track that really makes it stand.

The music shifts to a slower, haunting tempo for “Screaming”. The lyrics speak to the struggle of finding one’s sexual identity, especially when it conflicts with the norms established by society.

“No More War” is a plea for world peace and a hope that money used to feed war machine can instead be used to help those who are hungry and in need. The tempo has a slow, jazzy take that fits the tone perfectly.

Cris Cioe of Uptown Horns provides the alto sax on “Love and Money”, a track that talks about two powerful influences in our lives. In the end, as the repeated refrain notes, money is the root of all evil. That would then make love the root of all good.

Side two starts with “Smalltown Boy”, the story of a young man shunned by his family for being homosexual. The song packs an emotional charge as it looks at loneliness, isolation and the effects of bullying. As the band’s first single, it went all the way to number 3 in the UK, number 4 in Ireland and number 3 in Germany. In the US, it got as high as number 48 on the Hot 100 charts and number 1 on the Dance charts.

The rhythms on “Heatwave” are provided by the tap dancing of Caroline O’Connor, an English-Australian singer, actress and dancer. That along with the quirky keyboards gives the song a very jaunty sound. I love the way Somerville stretches out the word heat; it gives the song a sizzle.

“Junk” changes things up again, going back to a more urgent synth beat that was typical of the 80’s new wave dance sound. The lyrics decry disposable culture.

“Need a Man Blues” is an ode to an aching, raw need for love. I like how it starts out in a jazz style but quickly shifts into a synthpop mode.

A re-recorded version of “I Feel Love / Johnny Remember Me” was released as the fourth single; that version also featured Soft Cell singer Marc Almond on vocals. “I Feel Love” was first recorded by disco queen Donna Summer in 1977 while “Johnny Remember Me” was a number 1 hit in the UK by John Leyton. I like how this track seamlessly blends the two songs, thanks to a driving instrumental composition.

When The Age of Consent was released I was in my sophomore year of college, and Bronski Beat was one of those groups that could be heard on the campus radio station. At the time, I really did not know many openly gay individuals (though years later a few people I knew quite well did feel comfortable with coming out). Looking back at this album, I can see how it might have been a little controversial at the time as things were quite different back then. But I am sure it opened a lot of much-needed dialogue. We’ve come a long way in twenty-eight years since as a society, but we still have quite a ways to go.
Posted by Martin Maenza at 4:30 AM

I first heard of this album in the movie "Edge of Seventeen" -- I think 'Small Town Boy' and "Why' were on the soundtrack, and the band is referenced several times in the film (it's about a gay teen coming out to himself and others in the 80's).

Great dance-pop with some intelligent lyrics. Jimmy Somerville was daring at a time when it wasn't cool to speak of such things.