DVD: Queen - Days of Our Lives 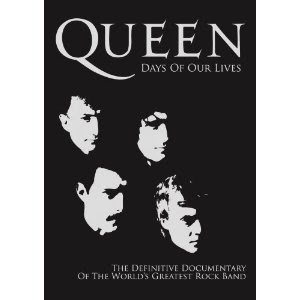 The title of this 2011 BBC documentary about the legendary rock band Queen comes from a track from their 1991 album Innuendo, their final studio release with lead singer Freddie Mercury. Drummer Roger Taylor penned a song called “These Are the Days of Our Lives” for that record. The title too could reflect a bit of the American soap opera by the same name for, as this documentary points out, the band went through quite a bit of trials and tribulations in their twenty years as a group.


The roots of Queen started out with a band named Smile in the late 1960’s with Taylor and guitarist Brian May. They met Mercury just before that band dissolved; at Mercury’s insistence they decided to carry on under the name of Queen. John Deacon joined just prior to the release of their self-titled debut album in 1973.

But, as part one of this two part documentary (both of which are on the DVD release) tells us, it wasn’t all instant success. The band had to work hard to win fans and the media, especially in their own native UK. And after they conquered Europe, they had to find a way to win over America. In part two, we see how the band learned that America can love you one minute and be ready to dismiss you the next.

As a lover of music and someone who is a fan of the band, I have to say I got a lot out of this release. It included some lost footage from the band’s early appearances on British TV as well as some open, honest stories from May and Taylor about key times in the group’s twenty years as a quartet. Many of the behind the scenes studio tales of how songs and albums came together are fascinating to me. It is also interesting to see the effects of outside influences on the group as they were hitting a peak of fame in the early 80’s as well as how the band almost shattered apart until their performance at Live Aid really re-energized the group.

Of course, the final act focuses on Mercury learning he was HIV positive and eventually succumbing to AIDS. And yet he worked non-stop until his final days doing what he loved, making music - even if he never would be around for its final release. He was the ultimate of front-men and, as this documentary showed, he seemed to thrive and grow even more so when the group found themselves playing for stadium capacity crowds in the later years of their run. The man had so much charisma that fans could not help but be moved by him. It is so hard to believe he has been gone for twenty years now; it is a tragedy we lost him too soon.

Besides the two hours of the band’s story, there are also seven new music videos for the songs “Seven Seas of Rhye”, “Killer Queen”, “Somebody to Love”, “We Are the Champions”, “Crazy Little Thing Called Love”, “Under Pressure” and “Radio Ga Ga” which feature different footage and angles.
Posted by Martin Maenza at 4:31 AM