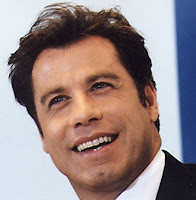 Born and raised in Englewood, New Jersey, Travolta was the youngest of children. All got the love of music and acting from their mother who worked in radio before becoming a high school English and drama teacher. After high school, we got a roll in a touring company of Grease and then on Broadway in Over Here!.


He moved out to Los Angeles to further his career and landed a small part in the film Carrie (1976) and then a starring part in the TV film The Boy in the Plastic Bubble (1976). He really hit it big with the star-making role of Vinnie Barberino on the ABC sitcom Welcome Back, Kotter, which he did from 1975 to 1979. During that time he also released an album that included the hit single "Let Her In".

However, the silver screen was calling to him very strongly. And a number of the films Travolta starred in also had major hit soundtracks. Some of those albums I have reviewed previously here on my blog.

For 1977's Saturday Night Fever where he danced across the screen as Tony Manero, click here.

For 1978's Grease where he crooned as Danny Zuko, click here.

For 1980's Urban Cowboy where he sparked the line-dance craze, click here.

For 1983's Staying Alive where he returned to the Tony Manero role for a sequel, click here.

After a number of blockbusters, Travolta then appeared is some less than stellar hits for the late 80's. The 90's opened up with some comedies in the Look Who's Talking franchise. In 1994, he appeared as Vincent Vega in Quentin Tarantino's Pulp Fiction which helped re-energize his career. He followed it with the edgy comedy Get Shorty. Then there was a string of out-of-this-world flicks like Michael and Phenomenon in 1996.

Looking over his filmography, he managed to appear in a film or two each year since the late 70‘s. In 2007 he took a big risk by donning padding and drag to play Edna Turnblad in the hit remake of John Water's Hairspray (click here for that soundtrack review), which offered him another singing and dancing role.

I have always enjoyed John Travolta's work ever since the days of Kotter. My cousin Joan was a huge fan too (she had his album and posters on her wall) so we often saw his early films in the local hometown theatre during the late 70's and early 80's.
Posted by Martin Maenza at 4:30 AM