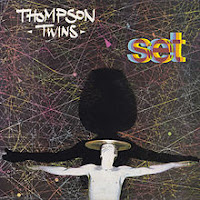 In February of 1982, the English pop group Thompson Twins released their second studio album Set on their own imprint label T Records. It charted in the UK, climbing to the number 48 position on the album charts. At this time, the band consisted of seven members (the known trio of Tom Bailey, Alannah Currie and Joe Leeway who would continue with the group name after this album, and Chris Bell, Peter Dood, John Roog and Matthew Seligman).


Side one opens with “In the Name of Love”, a last minute entry to the album written by Bailey. The track was meant to be filler but was chosen by the label as the first single release. It made a big splash in the US, holding down the number 1 on the US Hot Dance Tracks chart for five straight weeks. The sound here is more a kin to that which would be coming a year later on the third album (heavier synth, funkier guitars, and layered percussion).

“Living In Europe” dips back into the sharp, harsh edges from the first record. The guitars of Dood, Roog and Seligman are more pronounced.

“Bouncing” has a high energy rhythm to it, perfect for doing the pogo in a crowded club.

The band goes with more tribal rhythms on “Tok Tok”, very much a world-music song. It brings to mind somewhere on the African continent.

“Good Gosh” has an interesting mix of synths and guitars. Currie can be heard on the backing vocals on this one along with her saxophone playing. I like the steel drums used here too.

“The Rowe” is one of three tracks that Thomas Dolby provided additional synthesizers on (the other two would be “Runaway” and “Fool’s Gold”). This one starts out at a slower tempo on the first verse and then increases in speed as well as adds in the strong guitar presence on the second verse.

Side two starts off with “Runaway”, the only other single from this album. The track has a very strong percussion line (the group’s strong suit). The lyrics tell of someone who can no longer stay in a relationship and therefore takes off.

“Another Fantasy” sounds a lot like early Psychedelic Furs or Siouxsie and the Banshees, both groups that the album’s producer Steve Lillywhite had worked with previously.

“Fool’s Gold” brings back the funkier dance style with it. I like the stop-go pauses that are worked in through out.

The opening of “Crazy Dog” brings to mind a summer rain shower and then a chase down dark, wet abandoned streets in the late hours of the night. It is a very edgy track.

“Blind” closes out the album with a song about misguided individuals leading others down a similar path.

As regular readers of my blog know, I am a very big Thompson Twins fan. That being said, Set and the group’s debut album managed to allude my grasp for a number of decades. I knew they existed because I knew that “In the Name of Love” and “Bouncing” came from them. However, I could not seem to locate them anywhere.

That is until last month. I managed to score a Thompson Twins box set of four double-disk CD sets from 2008 that re-mastered the groups first five albums and included various B-sides, remixes and more. I could not pass up getting this import set even after a 30 year wait. It has definitely helped me see the roots of the group and how, with this album Set, the band was making a transition to the group I’ve known and loved since 1983.
Posted by Martin Maenza at 4:30 AM