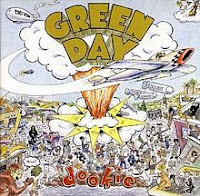 In February of 1994, the California rock band Green Day released their third studio album Dookie. This was a breakthrough record for them, their first on a major label, as it launched the band into worldwide fame and sales. The album reached number 2 on the US Billboard Hot 200, number 1 in Australia, New Zealand and Canada, number 4 in Germany and number 13 in the UK. It has sold over 15 million copies worldwide and it won the band the Grammy Award for Best Alternative Music Album in 1995.


Rolling Stone magazine has ranked the album at number 193 on its list of the 500 Greatest Albums of All Time. Time magazine crowned it the third best album of 1994 and the best rock album of the year too. It also appears on the list of the 1001 Albums You Must Hear Before You Die.

Things open up with “Burnout”, a full out “I don’t care” anthem. Like any good punk song, it has a hard, fast rhythm and gets in and out in just over two minutes.

“Having a Blast” explodes, pun intended, with a full-on-rage over a failed relationship. Okay, maybe the lyrics seem a bit extreme but that’s kind of what punk is about.

“Chump” poses in interesting situation: can one hate someone they’ve never met? According to Armstrong’s song, the answer would be yes. I really like the rhythm on this one, especially the thumping guitars in the bridge.

The first single released was “Longview” which went to number 30 in the UK, number 13 on the US Mainstream Rock charts and number 1 on the US Modern Rock charts. The lyrics center on being totally bored and passing the time with self-indulgent pastimes and ignoring personal hygiene. I like the guitar riffs on the verses of this one, very cool and laid back.

“Welcome to Paradise”, the second single, went to number 20 in the UK and number 7 on the US Modern Rock charts. The song is a re-recording of a track that appeared on their second studio album. The lyrics are about moving away from home for the first time, and how sometimes where you end up living isn’t quite exactly what you had in mind when you imagined getting out on your own.

“Pulling Teeth” is a song about an abusive relationship, about a woman physically abusing a guy with whom she’s involved. He feels like he is in prison and can’t get away from it. I like that it has an old fashioned rock sound to it.

As the third single “Basket Case” scored quite well (number 12 in Canada, number 7 in the UK, number 3 in Sweden, number 9 on the US Mainstream and number 1 for five weeks on the US Modern Rock charts). The song focuses on Armstrong’s struggles with anxiety attacks brought on by a panic disorder. I remember when this one would come on the radio back in the 90’s; I couldn’t help but sing along to it.

“She”, the fifth and final single, went to number 5 on the US Modern Rock charts and number 18 on the Mainstream Rock charts. This one is about a former girlfriend who wrote feminist poetry. From this album, I definitely think Armstrong had some very messed up dating experiences early on in his life. But it does make for some good songs.

“Sassafras Roots” is also about the same former girlfriend from the previous song. Clearly Armstrong thinks she wasted a lot of time doing nothing (as evidenced by the phrase repeated every other line of the song).

“When I Come Around”, the fourth single, also did very well. It too made it to number 1 on the US Modern Rock charts (for seven weeks) and it also reached number 2 on the US Mainstream Rock chart, number 3 in Canada and number 4 in New Zealand. The lyrics are personal, reflecting upon Armstrong’s relationship with then-girlfriend Adrienne. The guitar riffs in this one are so signature 90’s rock for me; I definitely enjoyed when this song would come on the radio so I could crank it.

“Coming Clean” is a personal song about Armstrong coming to terms with his bisexuality as a teenager.

Armstrong wrote all the tracks on the album except for two. One of those is “Emenius Sleepus” which was written by bassist Mike Dirnt. The song is about running into an old acquaintance after a long time. Lyrically, I don’t think it is as strong as the earlier tracks.

Armstrong wrote “In the End” about his mother and her husband. Man, this one is pedal-to-the-metal from start to finish. I’m just tired listening to it.

“F.O.D” is the ultimate ending of relationship. I like the simple, slow guitar at the start of this one; it makes the track stand out. Of course, this is Green Day so it has to get loud and thrashing in the end.

There is also a hidden track on the album “All by Myself”. This one was written by the band’s drummer Tré Cool. The guitar and the vocal delivery give this one a bit of a creepy, perverted sound that perfectly fits the song.

So, in 1994 when Green Day was shooting up the charts with Dookie, I was standing on the doorway of thirty and preparing to bring a child into the world. I definitely was not the band’s target market. Still, this old man could definitely enjoy what these guys were laying down. That’s the thing about good punk songs - they are relatable in spirit and attitude at the very least. This one is definitely a newer classic and deserves to go down proudly in the history of rock and roll.
Posted by Martin Maenza at 4:30 AM