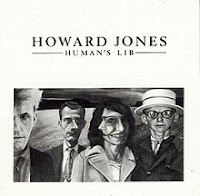 On March 17th of 1984, Jones released his first studio album Human’s Lib, a record that debuted at the number 1 spot on the UK album charts and spent a total of fifty-seven weeks on the charts. It went to number 8 in Germany and number 5 in Sweden; in the US it got as high as number 59 on the Billboard Hot 200 album chart. He was involved with the composition of all of the tracks and played all keyboards and synthesizers. Davey Payne provided the saxophone on the album.


Side one opens with the mechanical rhythm of “Conditioning”. The lyrics examine how we are influenced by those around us growing up, impacting how we see ourselves. Ultimately, as the final verse points out, who is to say what is what? It is a very thought provoking piece of synthpop.

The second single “What Is Love?” went to number 2 in the UK and number 33 on US Billboard Top-40. This song that ponders the meaning of that most enigmatic of emotions was one I can recall hearing all over the radio and on MTV back in the day. I really like how Jones layers the backing vocals on this one to give it a richer sound.

Payne‘s horns are a big part of “Pearl In the Shell”, the fourth single; it settled at number 7 on the UK charts. This one has a very simple lyrical structure of chorus, short verse, repeated chorus, and then repeated verse with a few more lines.

“Hide and Seek”, the third single, went to number 12 in the UK. The opening sets a very moving tone for the piece. I get a bit of a metaphysical feel from this one, especially the first verse.

“Hunt the Self” goes a bit more into the new-wave realm with a punctuated, at times tribal, dance beat. The lyrics, to me, seem to speak to a frustration with academia and a desire to begin a new chapter of life, to find one’s true self.

Side two begins with “New Song”, the first single. It reached number 3 on the UK charts and number 27 on the US Billboard Top-40. I like the repeated chord pattern that is the foundation of this one; it works along in the background and gets into your head. This one always gets me into a good mood and I’ll sing along to it whenever it comes on the radio. A little known fact that this lifetime comic book geek can appreciate: the song can be heard in the background of a scene in the 1984 film Supergirl.

Things slow down a bit with “Don’t Always Look at the Rain”, a song about those people who have given up and accepted whatever lot they find themselves in. Jones suggests we have to fight this sluggish tendency, to grow and change even if it takes a long time to do so.

The dance rhythms return with “Equality”; the beats and the synth lines on this on are very infectious. They always get my head bobbing. The message on this one is simply that no matter our accomplishments or our station in life we are all the same. We’re all humans under the skin.

“Natural” is next, a song about peace and tolerance. I have to admit this is probably my least favorite track on the album (one has to be the least favorite). I guess it just doesn’t stick with me as much as the others do. Still, it is a solidly crafted song.

The title track “Human’s Lib” closes out the record. The urgent keyboards on this one give it an air of hopelessness. It is a very interesting score.

The CD release of the album included “China Dance”, an instrumental track that appeared on the twelve inch single of “Hide and Seek”. It captures the flavors and textures of the orient beautifully.

I first picked up Human’s Lib on cassette in 1985 while I was working my co-op job in New Jersey between my sophomore and junior years of college. What I’ve always liked about this album is the mix of wonderfully crafted synth compositions and thought provoking lyrics. Howard Jones is a master musician and this debut album showed off those skills brilliantly.

I had the pleasure of seeing him perform live in the late 90’s as part of a tour with the Human League and Culture Club. That was an amazing night of music.
Posted by Martin Maenza at 4:30 AM