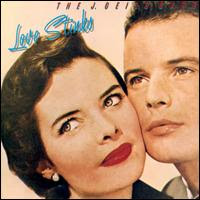 In 1980, the J. Geils Band entered into their second decade of recording with the album Love Stinks. The album went to number 18 on the US Billboard Hot 200 chart and generated a couple of singles.


Side one opens with “Just Can’t Wait”; as the second single, it only reached number 78 on the US Billboard Hot 100. Geils opens it with a driving guitar riff to which Magic Dick adds the harmonica accompaniment. Peter Wolf provides the vocals to an anthem that any loving-hungered teens could relate to. It is a rousing way to open the album.

“Come Back”, the first single, went to number 32 on the US Billboard Top 40 and number 69 on the US Billboard Dance chart. The song is fueled by the opening synthesizers played by Seth Justman. Along with the driving drums by Stephen Bladd, the song has a bit of a Euro-disco sound to it. To me, the song is a nice bridge between the dance music of the late 70’s and the new-wave that was crashing down on the early 80’s.

Geils and bassist Danny Klein give “Takin’ You Down” a down-and-dirty rocking resonance. Magic Dick has a powerful saxophone solo on this one. The synthesizer beat at the start and end has a new-wave touch to it.

In 1965, the Strangeloves recorded the song “Night Time”. The J. Geils Band cover is a full-on rampage of a number, full of high-energy and attitude. You can definitely tell these guys had a lot of fun doing this number.

“No Anchovies, Please” is an odd little track. It has a jazzy tune to it, while the narrative is a strange story about a woman who is kidnapped and experimented upon. This is most definitely an out-of-place piece.

Side two opens with the third and final single; the title track “Love Stinks” went to number 38 on the US Billboard Top 40 charts. I’ve always liked the beat of this one, with the foot-pedal pounding out on the bass drum. And who among our generation hasn’t found themselves using the refrain of this one to describe a relationship gone wrong in our lives?

“Trying Not to Think About It” has a very heavy, dark opening to it which melts away to reveal a more funky-rock rest of the song. As the longest track, over six minutes, they get a really good jam going on this one.

“Desire (Please Don’t Turn Away)” opens with a satisfying synth solo by Justman, setting the tone for this pleading ballad.

The side and album come to a close with “’Till the Walls Come Tumblin’ Down”, a slinky-sexy swinging number. This one draws upon Geils’ blues roots. I definitely recall hearing this one a lot growing up.

My major exposure to the J. Geils Band came from my older brother as he had Love Stinks among others by the group on vinyl. I was also very familiar with a number of the songs here from the radio, both the Top 40 and the album-rock stations I bounced back and forth between. I think the record is a decent mix for the most part, except for that closing track on side one (what in the world were they thinking?).
Posted by Martin Maenza at 4:30 AM