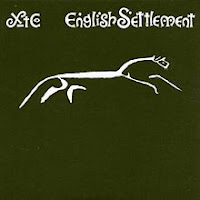 Today (February 12th) marks the 30th anniversary of the release of XTC’s fifth studio album English Settlement. The 1982 release went to number 5 on their native UK album charts; in the US it reached number 48 on the Billboard Album chart.

The original UK album was a double-disk set with fifteen tracks total. The initial US vinyl release was a single disk containing ten songs and the world-wide release had a similar configuration (with the eighth track being different between the two). For this album review I will cover the US release.


Side one starts with “Runaways”, a mid-tempo track about a child living on the street to escape domestic violence at home. Terry Chambers’ drum beats set a very heavy tone for the serious lyrical message to be delivered.

“Ball and Chain”, the second single, reached number 58 in the UK. This bouncy ditty is about the preservation of buildings being torn down to make way for highways and office complexes.

“Senses Working Overtime” was the first single from the album; it got to number 10 in the UK (it would be their final Top 40 track for a decade), number 36 in Canada and number 38 on the US Billboard Mainstream Rock Tracks charts. The song is about how our senses are bombarded daily with what is going on in the world around us, and what we need to do with all that information to make the world a better place. This track gets a lot of play on Sirius/XM 1st Wave; I hear it at least once a week during my commutes about town for work or errands.

Next up is epic six-minute long “Jason and the Argonauts” where a man tells the tales of the people he has seen in his many travels. I enjoy the guitar work on this one by Colin Moulding, Andy Partridge, and Dave Gregory.

“Snowman” has a touch of Ska to it. Lyrically, the song is about a relationship where the woman is suddenly giving her man the cold shoulder and he has no idea why.

Side two begins with “Melt the Guns”, a plea for world peace. The song has a bit of a tropical swing to it. I like the comic book reference to the Justice League of America here (my favorite super-hero team book growing up), even if it is reference to the US being a provider of arms to a number of nations.

“No Thugs in Our House” was the third and final single from the album. I like the classic 70’s rock feel it has musically. Lyrically, the song is about a troubled young man whose parents live in denial about his violent activities as part of a gang.

“It’s Nearly Africa” comes with a tribal rhythm in its percussion and vocal delivery style.

“English Roundabout” is a straight-forward commentary about traffic in the UK. It has a very catchy rhythm to it that gets my head bopping.

The album closes with “All of a Sudden (It’s Too Late)”, a song about how life can change in an instant and you find yourself scrambling. I like the mid-tempo rhythm that Chambers lays out on this one.

The other five tracks from the UK release include “Yacht Dance” (a festive tune featuring Gregory on the Spanish guitar) which also appears on the world-wide release as track eight, “Leisure”(a quirky song about wasting time playing video games rather than working a job for a living), “Knuckle Down” (a track promoting racial harmony and tolerance), “Fly on the Wall” (a danceable number about all-seeing observers that know every little detail about your life) and “Down in the Cockpit” (an up-tempo tune that comments on the division of the sexes).

In 1982, if I ran across anything by XTC it would have been on the local college radio station I listened to in my hometown. “Senses Working Overtime” is one I am sure I heard back then as it was the big single. In listening to this full album today, what strikes me is how relevant the songs are today as they were thirty years ago. That helps make this make English Settlement a timeless classic.
Posted by Martin Maenza at 4:30 AM