Mötley Crüe - Shout at the Devil 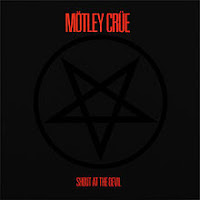 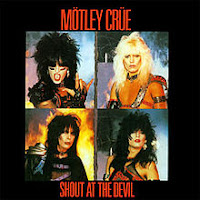 The original vinyl album art was a black embossed image of a satanic symbol and the text in red. Later releases substituted an alternate cover featuring the four members of the band in a style that was a tribute to the Beatles‘ Let It Be album. Both images can be seen with this review.

Side one begins appropriately with “In the Beginning”, a track slightly more than a minute long that serves an apocalyptic prelude to the record. Studio engineer Geoff Workman delivered the narrative to the track.

“Shout at the Devil”, the album’s first single, went to number 30 on the US Mainstream Rock Tracks chart. It opens with a now-infamous guitar riff by Mick Mars followed by Neil’s chant-along delivery of the song’s title over and over. Nikki Sixx and Tommy Lee follow along with thundering bass and drums respectively. The lyrics are about youthful rebellion, about having a confident attitude that you can stand up to anyone - even the Devil himself.

The second single “Looks That Kill” went to number 54 on the US Billboard Hot 100 and number 12 on the Mainstream Rock Tracks charts. The song celebrates a gorgeous woman out to have a good time. Like the previous track, this is one that sounds great with the volume cranked.

“Bastard” opens with a Lee drum solo before being joined by the rest of the band. He really drives this one, setting the pace for the others to follow. This is a good example of how tight Crüe was as a group.

“God Bless the Children of the Beast” is a minute and a half guitar instrumental written and performed by Mars. It acts as a bit of a respite between the fast-paced, hard-rocking tracks.

The Beatles first released the song “Helter Skelter” in 1968 White Album. Crüe delivers a worthy cover of the classic Lennon-McCartney tune. Neil spit’s the lyrics like venom, and Mars’ guitar solo is amazing.

Side two kicks off with “Red Hot”, an appropriately titled high-speed track that smokes.

“Too Young to Fall in Love”, the final single from the album, barely cracked the Billboard Hot 100 (it stalled at number 90) but scored well on the Mainstream Rock Tracks chart (where it reached number 17). I think the song is a little under appreciated; it has a decent hook and great guitars. Someone must agree with me as the song has since been used in the 2002 video game Grand Theft Auto: Vice City.

“Knock ‘Em Dead, Kid” tells the tale of someone has gotten beaten up and has come back with a vengeance.

“Ten Seconds to Love” is about the adrenaline that comes in anticipation of sexual relations.

The album closes out with “Danger”, a slower tempo, for Crüe, track.

Shout at the Devil came out just as I was starting my freshman year of college in 1983. When I came home on break at Thanksgiving, my best-friend John had this album and would play it while we hung out at his house. He was definitely into Mötley Crüe and other heavier rock acts. I certainly came to appreciate the band and the record at the time. About three years ago, I added Crüe’s first five albums to my digital music library which covered all of their 80’s releases. I like to throw them on when I’m in a hard-rocking mood.
Posted by Martin Maenza at 4:30 AM