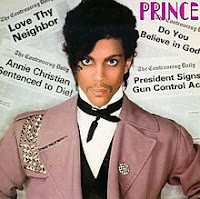 On October 14, 1981, Prince released his fourth studio album Controversy. The album peaked at number 21 on the US Billboard Hot 200 and reached Platinum selling status by early 1982. On the US Billboard R&B charts it went all the way to number 3.


Side one begins with the title track. “Controversy” grooves on with a funky rhythm and pounding drumbeat for over seven minutes. As the first single from the album, it went to number 70 on the US Billboard Hot 100 and number 3 on the US R&B charts; in Australia it went to number 15. Through the song, Prince makes comment on all the media attention he had been receiving. So many questions had been bantered about surrounding his religion, racial background and sexual preferences. He scoffs at all the curiosity and manages to avoid answering any speculations at the same time. He then adds to the whole controversy by reciting the Lord’s Prayer, which just fueled the media fires further. As a young Catholic who was heavily involved in the church’s youth organization at the time this album came out, I was not offended in the slightest. I saw it as him exercising a freedom of speech via his music.

“Sexuality” was released as a single only in Germany, Japan and Australia. The song has a quick-paced tempo built from a synthesized bass line and drum machine beats. The lyrics speak of a free society not burdened by sexual chains or prejudices. As Prince sings, he wants to be in the “New Breed” that should organize and stand up for what they believe.

He breaks out the sweet falsetto for “Do Me, Baby”, an R&B slow-jam ballad about a night of passion. This third single failed to make any major chart rankings most likely due to how much of the song had to be left behind to fit into a radio-acceptable length. The album cut slowly builds to a climax over nearly eight minutes total, ending in a post-coital moment of vulnerability. I find it to be raw and real.

Side two opens with “Private Joy”, an innuendo-laden dance track with heavy synthesizers. The lyrics center on keeping secret the name of his lover. This one is a four-star track for me; I just love the clap-along chorus and the keyboard riffs. This was one of those tunes I would throw on to get myself into the mood for a night out dancing.

“Ronnie, Talk To Russia” was a rapid-fire political message to President Reagan about disarmament. The track is under two minutes, taking on a bit of a punk feel and attitude. It is the perfect bouncy follow up to the previous track, creating a one-two punch.

“Let’s Work” was the second single; it went to number 104 on the US Billboard Hot 200 and number 9 on the US R&B charts. This hip-grinding dance track features the bass guitar grooves of Brown Mark.

“Annie Christian” is another song ripped from the headlines; it tells the story of a fictional shooter who kills in the name of divine motivation. It references the murder of John Lennon and the assassination attempt President Reagan among other real world events.

One more track that goes with this album is “Gotta Stop (Messin’ About)”, the B-side to the US 12-inch single for “Let’s Work”. The track actually has new-wave nuances to it, showing that Prince was well aware of the current trends in music at the time and how to spin them into his repertoire.

Controversy was really my gateway album into the musical kingdom of Prince. When it came out in 1981, I was in my junior year of high school. Top 40 radio was not playing these songs so my exposure to them came via the local college radio station. One of the student deejays often shared his love of Prince’s dance grooves by playing them during his show, “Vito’s Saturday Afternoon Tea Party”.

It did not take me long to seek this album out on vinyl at the local record store. From there, I became a fan for life. This one took many spins on my turntable during my high school and college years; I made myself a copy on cassette to play in my car, and it was one of the albums I quickly replaced on CD when I left my vinyl behind.

Controversy will always remain one of those albums I never grow tired of listening to.
Posted by Martin Maenza at 4:30 AM