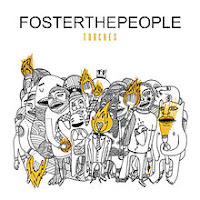 After a three song, self-title debut EP in January of 2011, they released their first full length album Torches in May of 2011. The album hit number 18 in New Zealand, number 13 in Ireland, number 12 in the UK, number 8 on the US Billboard Hot 200 and number 1 on the US Alternative, US Mainstream Rock and the Australian charts.


The album opens with “Helena Beat”, the second single from the album. The song has a tribal beat and some heavy synth lines which, together, make for an interesting dance sound. The lyrics tell of struggling to get through life, to make ends meet, and that sometimes bad choices can lead to things that are difficult to beat (like addictions).

“Pumped Up Kicks” was the band’s first single, a Platinum seller in a number of markets. It reached number 18 in the UK, number 10 in France, number 9 in Germany, number 3 in Canada and the US Billboard Top 40, and number 1 on the US and Canadian Alternative charts. The song combines catchy, upbeat musical hooks with the serious subject of a teen with thoughts of going on a killing spree. The chorus on this one is what gets in my head and doesn’t let go until I sing along to it.

The third single released was “Call It What You Want”. Again, I like opening musical elements - sort of a synth/funk experiment that works well. Foster definitely has a way with catchy, pop hooks (something he likely picked up from his time as a commercial jingle writer). This one was instantly likeable to me upon the very first listen.

“Don’t Stop (Color on the Walls)” was the fourth and final single from the album. This song I already knew for TV commercials that incorporated parts of it. The lyrics, with their short stanzas and rhyming nature bring to mind books used to teach young children to read. That and the upbeat tempo give it a whimsical, childlike quality that is approachable and non-threatening.

The carefree swing to “Waste” gets my feet tapping. Lyrically, it is about standing by someone despite the fact that they may be ruining their life.

“I Would Do Anything for You”, a love song, takes a slower tempo on its verses but then gets bouncier on the chorus. I like the piano on that part of the song.

“Houdini” gets us right back into the dance mode with its one-two punch of percussion and keyboards. The same musical hooks bleed over into the next track “Life on the Nickel”.

“Miss You” is about those feelings that remain when a relationship ends and how they can drive one to do something drastic like suicide. The beat on this one is another interesting composition - upbeat for a downbeat subject matter.

“Warrant” opens on an almost angelic note, but the underlying beat grows behind it and eventually overtakes it entirely. The lyrics are all about escaping those that are trying to take you down.

Having a teenaged son in high school, I was familiar with Foster the People. My son is not a big fan most likely because he hears it all the time. He is more into dub-step music when it comes to new releases.

However, a friend of mine on Twitter suggested I give Torches a listen. He said that the group showed incredible 80’s influence in their music. I was already familiar with a few of the songs thanks to their appearances in commercials and on TV. So, I called up the album on Spotify and kicked back to take it for a spin.

I can definitely see what my friend was referring to. This album was full of catchy, danceable pop songs that had a familiar sound that was quite comforting and welcome to me. So often, today’s music seems overflowing with needless rap hooks and shallow lyrics. That is hardly the case here. Mark Foster and producer Paul Epworth have crafted a solid pop album that helps restore my faith in the future generation of musicians. If I were a teenager of this century, I would have been all over this record. There are definitely tracks here that I am going to have to bookmark to add to my music library at some point.
Posted by Martin Maenza at 4:31 AM

Great review my Friend.
I always try to establish a personal list of my favorite albums of each calendar year. While I certainly have that list for 2011, I could never decide on an absolute favorite. I will admit, however, that this album received more airplay in my life than any other in 2011. Listened to it more than anything else. Solid, sweeping, emotionally charged well crafted pop songs, each one embodied with both a tinge of sadness but also hope. Some dark lyrics paired with upbeat melody. Extremely well done. I will always think of warm sun and summer when I hear this album. cheers.