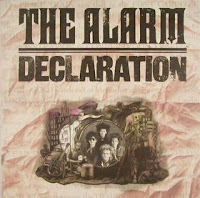 The Alarm followed their self-titled EP from the summer of 1983 (click here for my review of that one) with a full length album in February of 1984. Declaration went to number 6 on the UK album charts and number 50 on the US Billboard Hot 200. It included a couple tracks from the EP and a few other singles the band had released between the two records.


Side one opens with the title track. "Declaration" is really a less than a minute overture for the rest of the album. It leads directly into the first full song. "Marching On", as I noted previously, is an anthem for the disgruntled youth of the day. It encourages them to make their voices heard through organized and peaceful demonstrations if possible.

As a single, "Where Were You Hiding When the Storm Broke?" went to number 22 on the UK charts. The lyrics talk of growing up amidst conflict and having to make tough choices. Those who fail to choose though and turn their back on those that need them are subject to a third degree questioning. I like the added touch of Peters on harmonica on this one; it gives it a flavor of the sound from his native Wales.

"Third Light" changes up the sound a bit, going for a heavier rock guitar chord. That fits well with the tone of the track about a forgotten soldier who lost his life defending his country.

"Sixty Eight Guns" was one of the earlier singles from 1983. It went to number 17 on the UK charts, number 106 on the US Billboard Hot 100 and number 39 on the US Mainstream Rock charts. Inspired by a book Peters read about street gangs in Glasgow in the 1960's, this track is one of the most known by the band. The trumpet played by Arthur Fairlie gives the song its signature fanfare. The version on this album has a quieting bridge in the center of its nearly six minute length. I find it to be a very powerful track.

"We Are Light" opens with the guitars of Peters, Dave Sharp and Eddie MacDonald. As the earlier tracks paint the picture of conflict and death, this one counterbalances them with hope. I find it is the perfect way to close out the first half of the record.

Side two starts with Nigel Twist‘s thundering drums on "Shout to the Devil". The background waling too sets quite a tone for this call to standing up in defiance to the oppressors.

"Blaze of Glory" is another anthem of freedom; it celebrates fighting for what is right and making sure that you do everything you must to be sure your voice is heard. As with the previous track, the guys weave in religious imagery into the lyrics with ease.

"Tell Me" is a mid-tempo, solo-penned track by Sharp.

"The Deceiver" was the last single released from the album; it went to number 51 in the UK and number 104 on the US Billboard Hot 100. Peters’ vocals spit in disgust at those who sit in positions of power and wealth, profiting on the misfortune of others during times of war.

"The Stand (Prophecy)" is a shorter, stripped down revisit to "The Stand" track which appeared on their debut EP (a single that went to number 86 on the UK charts). Here we get a bit over a minute with a new verse and the original chorus.

The album closes with "Howling Wind", a song about finding the seeds of new life and love in the wake of destruction and devastation. I like the rocking rhythm between the guitars and drums on this track.

Declaration came out when I was finishing up my first year of college. I was probably in a better place mentally at that time in 1984 to be more open to the messages in the music. I recall hearing these songs on the college radio station and also from my brother’s turntable (he owns a copy of this one on vinyl).

I have to admit that I was always more of a fan of the Alarm than I was of U2. While they both come from similar backgrounds and had initial albums that were full of political messages, the Alarm came across to me as more committed and firmly invested in their cause. This whole album carries an overall theme that deals with soldiers and war, and it is dedicated to the concepts of truth and justice. The difference too is that U2 went on to become huge mega-stars while the Alarm stuck to their guns (all sixty-eight of them) and didn’t appear to compromise themselves in the name of fame.
Posted by Martin Maenza at 4:30 AM