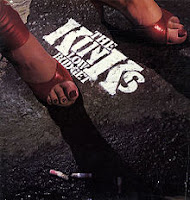 The Kinks closed out the 70’s with one of their best-selling non-compilation albums to date with 1979’s Low Budget. All eleven tracks were written lead singer, guitarist and keyboardist Ray Davies. The record peaked at number 11 on the US Billboard Hot 200.


Side one opens with the blazing guitars of “Attitude”. The song has a great rocking sound and is very much a response to the punk movement that was prominent at the end of that decade both in the UK and abroad. I love how the Kinks show the younger generation that they can easily play that game and play it well.

“Catch Me Now I’m Falling”, the fourth single, opens with a beautiful piano accompaniment. I love the reference in the lyrics to Captain America, the use of an American comic book icon to represent the United States which was going through some hard times in the late 70’s.

The fifth and final single from the album was “Pressure”, a rapid-fire rocker possessed by the spirit of Bo Diddley. The lyrics tell of life coming at one from all angles, sometimes too much to bear.

Mick Avory‘s drum beat at the opening of “National Health” sounds just like a heartbeat. The lyrics take a sarcastic stab at the continued rise in drug use, creating a culture of people hooked on things both legal and illegal. I like then how the rhythms change up a bit after that first verse and how the guys are the guitars create some great sound effects too. This is definitely one of those songs that are cool with headphones on.

Ray Davies draws upon another American comic book icon (one of the biggest) for the next track that comments on feeling ill-equipped and helpless at times. “(Wish I Could Fly Like) Superman” was the first single from the album and the only one to chart. It reached number 41 on the US Billboard Hot 100 singles chart and number 43 in Canada. I really like the guitar riffs in this one.

Side two begins with the title track “Low Budget”, a down and dirty ditty about learning to live under a tightened belt.

The Kinks get a little synthesized in the next song “In a Space”, a track about the growing world population.

The tempo drops down a bit with the gentle ballad “Little Bit of Emotion”, a song about people who hide their true feelings behind contrived facades. Nick Newall has a saxophone solo on this one.

The third single was “A Gallon of Gas”, a bluesy ode about the energy crisis that gripped nations in the 70‘s. I can remember quite well the lines at the gas stations where cars waited in line to fuel up.

“Misery” has an old time rocking sound thanks to the guitar and piano mix; to me it has a bit of a Rolling Stones sound to it.

“Moving Picture”, the final track, was the second single released from the album. The keyboards have a little bit of a sci-fi twinge to them and the sound is more pop than rock.

It was the summer before starting my freshman year of high school when Low Budget was released. That meant my older brother had just graduated high school and was getting ready to head off to college. I know this one played a good bit on his turntable and on the album-rock station we listened to out of Buffalo. Still, except for the hits I was not a huge fan of the Kinks at the time.

Looking back at the album now I can appreciate the social commentary that Ray Davies and guys were laying down as well as the amount of musical styles they worked with as well. They definitely showed that they were not yet ready to give up the rock reigns to the younger generation.
Posted by Martin Maenza at 4:30 AM

The Kinks are, I believe, the third greatest band of the British Invasion (and THAT'S saying quite a lot) behind the Beatles and Stones. I think their classic hits were very bit the equal to these two bands. Perhaps some of their non-hits didn't measure quite up to the other two.

Low Budget does have some beautiful tracks, which you have pointed out quite clearly. The title track, I believe, is one of their all-time classics. Ray spouting off the troubles of the low class working stiff (as only he could), wearing his size 28, when he takes 34!

Thanks for reminding us of this gem. Think I'll put it on for spin.

I always liked Dave's licks on Superman, I never could understand , that Gallon of Gas wasn't a bigger hit. Sometimes I feel in those days , that a lot of the song players & DJ's just didnt give the Kinks enough air play , or they thought the Kinks were not hip enough......

I would argue that the kinks were the greatest band to come out of the british invasion....if not for the ban from touring the U.S. during their prime 66 -69.I know they would have been more successful commercially....No doubt!
When I compare the beatles to the Kinks,to befair,you have to split them up....Ray davies vs lennon?...then Ray vs Paul?....hands down Davies wins IMO.
the Beatles are legends no doubt.I have everyone of their albums and love them,as well as the stones ..but they both,(beatles & stones)as well as many other british acts,reaped all the spoils from the American market.While the Kinks were left out of the fold.
1.Kinks
2.Beatles
3.Stones

I'm surprised that Superman was a hit in the US, but not in the UK. Like the Specials 'Ghost Town' 2 yrs later, it perfectly captured the zeitgeist in Britain, with the so-called 'winter of discontent', strikes and the fall of the Callaghan government.