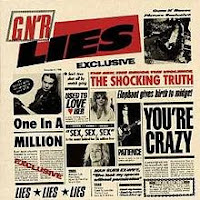 Following their smash hit debut album Appetite for Destruction (click here for my review of that one), Guns N’ Roses followed it up a year later in 1988 with G N’ R Lies. This one too went multi-Platinum in sales and scored well on the charts; it reached number 2 on the US Billboard Hot 200, number 7 in Sweden, number 13 in Canada, number 15 in Switzerland and number 22 in the UK.


Side one is labeled Live ?!*@ Like a Suicide and featured four tracks from an EP by the same name. That EP was first released in 1986 on the UZI Suicide label. Since it only had a US release of 10,000 copies, the band decided to repackage it as part of their second album.

They segue very easily into the next track. “Nice Boys” is a cover of a tune by Rose Tattoo, an Australian rock band from the 70’s and early 80’s; the song originally appeared on 1978‘s Rose Tattoo album. As the lyrics say “nice boys don’t play rock and roll”; the guys from GNR certainly could never be mistaken for nice boys.

“Move to the City” has a bit of a blues riff to it, grounded in a heavy metal rock sound.

The final track on the side is a cover of Aerosmith’s “Mama Kin” which first appeared on their 1973 self-titled debut album. The hard rockers from Los Angeles have gone on record that saying the classic Boston band was an inspiration to them. Guns N’ Roses do a pretty good job with their version of the song.

Side two is a quartet of new tracks by the band, all recorded with acoustic guitars.

The only single released from the album was the track “Patience”. The song went to number 4 on the US Billboard Top 40 chart, number 5 on the US Mainstream Rock chart, number 2 in Ireland, number 4 in New Zealand and the Netherlands, and number 10 in the UK. From Rose’s opening whistling, the listener is in for a thoughtful look at failing relationships. I can actually hear the maturity in his vocals on the verses.

“Used to Love Her” is a solo composition by guitarist Izzy Stradlin. Some might suspect that the song is about a bad relationship but it is in fact about Rose’s dog that, as the lyrics imply, he had to put down.

“You’re Crazy” appeared on the band’s debut album; here we get a nice acoustic version of the song. The tempo is slowed down quite a bit here, making it easier to follow the lyrics too.

“One in a Million”, a song Rose wrote describing his first arrival in Los Angeles, stirred up controversy with its lyrics that were viewed by some as homophobic and racist. While I think Rose was being rather blunt with his choice of words, some of which being derogatory slurs, it was ultimately his choice on how he wanted to express himself.

G N’ R Lies is an interesting beast that shows a number of contrasting views of the band. The first side is loud, rowdy and raw. The second side is more mellow and exposed. Side one is very much a band out to prove themselves. Side two is a band trying to show another facet of their sound. All together, we get an intriguing portrait of Guns N’ Roses.
Posted by Martin Maenza at 4:30 AM