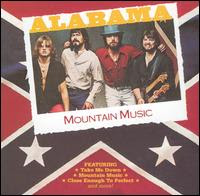 The country/southern-rock quartet Alabama got their start in 1969 but did not take their current band name until 1972.

On February 25 in 1982, exactly thirty years ago from today, they released their third studio album on the RCA label. Mountain Music was multi-Platinum in the US (where it went all the way to number 1 on the Country Album charts and number 14 on the Billboard Hot 200) and in Canada (where it reached number 38). It won them the Grammy Award for Best Country Performance by a Duo or Group that year, which further helped make it their most successful album.


Side one opens with the title track. “Mountain Music” was the first single; while it only reached number 101 on the US Billboard singles charts, it did go all the way to number 1 on the US Country, the Canadian Country and the Canadian Adult Contemporary charts. It opens with the wistful harmonica of Michael Douchette. The mix of guitars and vocal harmonies by Jeff Cook, Teddy Gentry and Randy Owen on this up-tempo tune invite everyone to sing along; I know I do on the chorus. When I mentioned that I was reviewing this one, even my wife started to sing the chorus. I like how album version includes a quick-step fiddle solo as well.

“Close Enough to Perfect”, the third single, hit number 1 on both the US and Canadian Country charts. It also reached number 65 on the US Billboard Hot 100. This ballad enumerates the many ways the man loves his woman despite any little perceived flaws.

The keyboards play well with the guitars on “Words at Twenty Paces”. The lyrics set up a showdown tale straight of a western, yet the confrontation is between a troubled couple. This is easily my favorite of the non-single tracks.

“Changes Comin’ On”, the longest track on the album, is a reflective song about growing up in the 1960’s and how things were changing here in America. It compares things then to the early 1980’s where again changes were happening.

The side closes with a cover of the John Fogerty penned 1969 hit for Creedence Clearwater Revival. Albama‘s version of “Green River” is a solid rendition, walking perfectly the line between the original and spinning it for a new generation.

Side two begins with “Take Me Down”, a single written by the band Exile. Their version was released as a single but failed to break the Hot 100. Alabama‘s version was the second single from the album. It too hit number 1 on the US Country, Canadian Country and Canadian Adult Contemporary charts. It also went to number 18 on the US Billboard Top-40 and number 5 on the US Adult Contemporary charts. I’ve always enjoyed its gentle swinging rhythm and cool harmonies.

“You Turn Me On” is a slow, smoldering love ballad sung with heart-felt emotion by Owen. He does try to go down the Barry White road here with the pillow-talk.

Gentry takes over the lead vocals on “Never Be One”, a lullaby he wrote and sung to his one year old daughter. It was released as the B-side of the first single.

“Lovin’ You Is Killin’ Me” was the B-side to the second single. This version is a re-recording of one of the band’s earliest songs. Cook provides the lead vocals on this well-paced number.

Cook, Gentry and Owen all share the lead vocals on “Gonna Have a Party”, a rousing good-time throw down.

Mountain Music has a strong crossover appeal as Alabama’s sound is not just country. They mix in the rock and pop elements very well, giving them a sound that appeals to a wider audience. I recall the time back in 1982 when the singles were crossing over into the pop stations I listened to. Alabama would also show up to perform on shows like Solid Gold and American Bandstand.

Listening to the whole album again, I find it holds up very well for celebrating its 30th anniversary. There are old favorites and there are fresh tracks that I am definitely interested in adding to my music library.
Posted by Martin Maenza at 4:30 AM

Wow, I grew up on these guys. And I was just listening to Brad Paisley's silly "Old Alabama" the other day.

I can sing along with almost every song on this album.