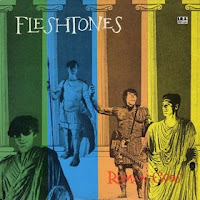 In the mid-1970’s, four guys from Queens, NY, formed a garage rock band. It started with roommates Keith Streng and Marek Pakulski on guitar and bass respectively. They added friends Peter Zaremba (on harmonica, keyboards and vocals) and Lenny Calderon (on drums). In May of 1976 they played their first gig at CBGB, the famed Manhattan club, as the Fleshtones.


After releasing a few EPs, the Fleshtones released their first full-length album on the I.R.S. label in February of 1982. Even though the band had mostly a cult following, Roman Gods still managed to make a mark on the US Billboard Hot 200 chart. By this point, Bill Milhizer had replaced Calderon on drums, and the group was joined by Gordon Spaeth and John Weiss on saxophones.

Side one opens with “The Dreg (Fleshtone-77)”, a thumping rock-grinder with reverberating guitars.

“I’ve Gotta Change My Life” is a clap-along number with a hint of 60’s psychedelic thrown in thanks to the keyboards. Its lyrics are about coming to a realization that things have to change in order to get better.

“Stop Fooling Around!” continues along the same vein about taking charge of one’s life. It features Spaeth on a couple harmonica solos.

“Hope Come Back” is all about a couple who has split and how the guy wishes she’ll return to him.

I love the surf-rock tempo achieved by the drums and the guitars on “The World Has Changed”. It is my favorite track on this first side.

Side two starts with “R-I-G-H-T-S”, a fusion of blues and high-energy rock. My feet can’t sit still when this one is playing; it is a guaranteed crowd mover.

“Let’s See the Sun” is a rousing up-tempo number about the morning after a hook-up.

“Shadow-line” is a stealthy-strut; I really like the effects of the backing vocals and harmonies on this one.

“Chinese Kitchen”, like so many tracks on this record, shows what a tight musical combo this quartet of guys was. This is a very strong instrumental track.

“Ride Your Pony” is the one track from this album I was most familiar, for it appeared in a Rhino Music compilation series of early 80’s new-wave hidden gems. The song has the feel of a 60’s number written about a dance move, and its lyrics name-drop a number of cities around the country.

The title track “Roman Gods” closes things out. This instrumental jam has a funky-bass line to it and a smooth saxophone. I like the primal energy of it.

Although the Fleshtones have been steadily active from 1976 until the present, I think they are definitely an under-appreciated act of the early new-wave movement. The tracks found here on Roman Gods show a love of classic rock elements that they bring together in interesting ways. It does have a throwback style without sounding dated. And, it is music you could dance to which always appeals to me.
Posted by Martin Maenza at 4:30 AM