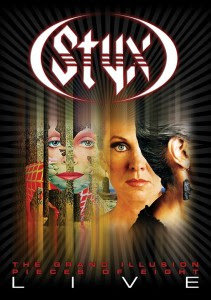 In November of 2010, the current line up of Styx (Tommy Shaw on guitar/vocals, James "JY" Young on guitar/vocals, Lawrence Gowan on keyboards/vocals, Todd Sucherman on drums/percussion, and Ricky Phillips on guitar/vocals) did a concert at the Orpheum Theater in Memphis, TN. That performance was captured in high definition video with eleven cameras, to create a live performance package for those not lucky enough to catch a show on the tour.

The idea for the show was a novel one. Take two of the big classic Styx albums from the late 70's - the Grand Illusion and Pieces of Eight - and perform them live from start to finish. That meant eighteen songs total, three of which the band had not played live previously. This DVD set gives you that show in all its musical brilliance.


I have talked previously about my love of The Grand Illusion here on the blog (click here for that). That album had some amazing hits like the title track, "Fooling Yourself", "Superstars" and "Come Sail Away". Add to it big hits from Pieces of Eight like "Sing for the Day", "Renegade" and "Blue Collar Man" and you have some very key Styx songs that any rock fan knows.

The band sounds and looks great. They put on an amazing show with lots of energy and enthusiasm. They look like they're having a great time performing these songs, even some of the deeper cuts that might excite only the most diehard of fans. Plus the band's original bassist Chuck Panozzo comes out to perform on a couple of the tracks too.

Now, some diehards might also be critical about the line-up (which has actually been together for a decade now). After all, of the five current members only Shaw and Young were with the band at the time the original albums were cut. I don’t buy into that. And while some would say Dennis DeYoung’s unique vocal element is missing from these new performances, I say the band still does a fantastic job playing the heck out of these songs. Gowan is an outstanding keyboardist as shown a number of times in this performance.

The video elements are a big part of this show too. They have a huge screen behind the band that mixes in an added dimension to the concert. I especially liked the Star Wars scroll at the start and the video of the teenager flipping through his collection of vinyl to cue up side one of the first album before the show starts. That was very nostalgic and fit in perfectly with the 1978 time period when these albums were huge.

Besides a nearly two hour show, the DVD also includes an in-depth behind the scenes video called “Putting On the Show”. It spotlights the crew and technicians that work behind the scenes with the band to put on such a performance. I was very impressed with all the technical details presented, and I am not a musician by any measure. Just seeing all of the guitars used in by the guys and the details about the drum kit and keyboards was very informative. The work that goes on before the band takes the stage and through out the performance is often under-appreciated by fans. Kudos to Styx for including this.

But wait that’s not all! The special three disk set not only includes the concert DVD but it also includes two live CDs, one for each album performed in the show. The audio is taken right from the Orpheum Theater show. That makes this package even more enjoyable as you can take the music with you after you’ve watched the show.
Posted by Martin Maenza at 4:29 AM

Great review! Saw these guys in Fort Worth a couple of weeks ago and they were on fire!

fantastic show in memphis..im in the dvd alot..