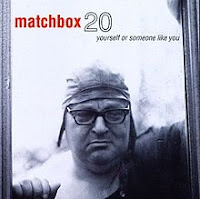 In the Fall of 1996, Thomas and his band Matchbox Twenty released their debut album Yourself or Someone Like You. The record was a huge seller, going multi-Platinum in a number of countries. It reached number 50 on the UK charts, number 11 on the Canadian charts, number 5 on the US Billboard Hot 200, and number 1 in Australia. It also was nominated for a number of awards including a Grammy and two American Music Awards.


The record opens with "Real World" which was the fourth single from the album. It broke into the Top 40 on the US Hot 100 (stopped at number 38) and made it all the way to number 5 in Canada. It opens with a very catchy guitar blend by Kyle Cook, Adam Gaynor and Brian Yale that gets into your head. The song is all about imagining what it would be like to live different lives and whether any of those scenarios would be better than what the singer is going through in the real world.

As the first single from the album and the band, "Long Day" only made some ripples on the US Mainstream Rock chart (where it went to number 8). Despite the acoustic opening verse, the song is more of a hard rocker.

"3 A.M.", the third single, reached number 1 in Canada and number 1 on the US Adult Top 40 chart. Thomas drew from his childhood when writing this one, to a time when his mother was battling cancer. The song conveys feelings of loneliness and frustration.

As the second single, "Push" went to number 1 on the US Modern Rock chart and number 6 in Canada. The song takes an interesting look at an abusive relationship with the man being physically and emotionally battered by a woman.

"Girl Like That" is about a young woman who has gone through rough times and the guy who loves her even though she is dragging him down with her.

The fifth single was "Back 2 Good"; it reached number 24 on the US Billboard Hot 100 chart. Lyrically, the song is about a failing relationship due to drinking and carousing. I like the added instruments like a bassoon and clarinet on this one; they give the song some interesting layers of complexity.

I like the varied rhythms between the verses and the chorus of "Damn", another song filled with frustration. This time it is about how a guy has been left by his girlfriend for another man.

"Argue" deals with the emotional confusion of a relationship in turmoil.

"Kody" is the story of a lonely young man who seeks solace in a bottle and makes others feel uncomfortable when he comes around.

"Busted" features some heavier guitar riffs and angrily delivered vocals. It is a dark song, musically as well as thematically. The definitely makes it stand out a bit from the rest of the record, showing a different facet of the band.

Next follows "Shame", whose sound is almost like the sun peeking through the dark clouds of the previous track.

The album closes with a bit of a change-up. Thomas tries his hand with the acoustic guitar on "Hang" while Cook takes the lead vocals.

It has been a good while since I last listened to Yourself or Someone Like You. We originally got the CD back in the 90’s when a number of these songs were getting a lot of radio airplay. Taken together in a cohesive package, you can that Thomas had many heavy concepts he wanted to convey in these songs. You would expect the then-twenty-four year old might have had some more upbeat messages to deliver. However, then again, this was the 90’s when the popular music themes were full of angst. And Matchbox Twenty could deliver their share in that department.
Posted by Martin Maenza at 4:30 AM

Email ThisBlogThis!Share to TwitterShare to FacebookShare to Pinterest
Labels: 90's, Adam Gaynor, Brian Yale, Kyle Cook, Matchbox Twenty, music, Rob Thomas, Yourself Or Someone Like You

I can't count how many times I listened to this CD in the late 90's. I think their follow-up record might be even better.